The federal government has ordered rail company OmniTRAX Inc. to complete railway repairs and resume rail service within 30 days to Churchill, Man., several months after the only ground transportation to town was flooded. 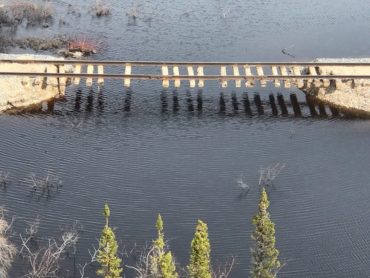 A portion of the Hudson Bay Railway to Churchill, Man., is shown in this 2017 handout photo. The federal government is threatening to sue the owner of a broken rail line that has left people in the northern Manitoba town of Churchill without a land connection to the outside world.The government says Denver-based Omnitrax has 30 days to fix the Hudson Bay Railway to Churchill or face an $18.8-million lawsuit. THE CANADIAN PRESS/HO-OmniTrax MANDATORY CREDIT

Natural Resources Canada said in a statement on Friday that since the rail service disruption in late May, the Government of Canada has been working towards the restoration of the rail line. “Despite these efforts, OmniTRAX Inc., the parent company of the owner and operator responsible for restoring service to the affected communities, has not met its obligations,” Jim Carr, Canada’s Minister of Natural Resources, said in the statement. “As such, today, Transport Canada sent OmniTRAX Inc. a notice of default of its agreement, demanding that it complete all railway repairs and resume rail service within 30 days. Failing this, Transport Canada will instruct Justice Canada to file a lawsuit for breach of contract.”

Carr added that the federal government will continue to meet with key stakeholders and buyers interested in acquiring the rail line. “I am encouraged by the significant breakthrough towards an agreement between Missinippi Rail and One North to create a unified group as a potential buyer,” Carr said in the statement. “I am optimistic that the partnership can develop a viable, sustainable business plan towards owning and operating the line. Their collective interest in regional ownership and focus on long-term sustainable operations represents an important step towards ensuring viable transportation in the years to come.”

As well, in the “coming weeks,” Canada’s appointed chief negotiator, Wayne Wouters, will continue to facilitate discussions between all parties, including with the new partnership, the statement said.

The federal government reported that it continues to make efforts to ensure the safety and security of people in Churchill and other communities along the Hudson Bail Rail line; these efforts pertain to food affordability, fuel resupply and storage, community support and economic development.

In early June, the Town of Churchill reported the “temporary loss of its rail line” into the community from recent flooding. At the time, the town said in a release that “unprecedented” snowfall in March that resulted in more than 100 centimetres of snow and “unparalleled” high water flows along the Churchill River led to flooding and continued high water flows.

The owners of the Hudson Bay Railway line, which is used to transport food, supplies and people to the remote town of 900, told the Canadian Press that flooding submerged a section of the track and stopped service on May 23.

In July, OmniTRAX said that the price tag for repairs to the track would be between $20 million and $60 million.