The governments of Manitoba and Canada have agreed to pay more than $90 million to certain First Nations who were affected by flooding in 2011. 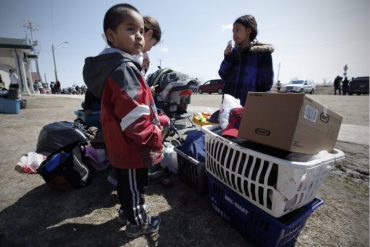 McKenzie Lake Lawyers LLP said in a statement released earlier this week that while not admitting wrongdoing, the governments of Manitoba and Canada have agreed to pay $90.283 million in a class action settlement, which includes a contribution towards lawyer fees and expenses as well as administration costs.

According to the settlement, all members of the Pinaymootang (Fairford), Little Saskatchewan, Lake St. Martin and Dauphin River First Nations who were a resident of Manitoba at the time of the 2011 flood are eligible to make claims for both disruption payments and special circumstances compensation.

The settlement approval hearing is scheduled for 10 a.m. on Jan. 12, 2018 at the Law Courts at 408 York Avenue in Winnipeg. The courts have determined that the class action is certified and can proceed as a group action rather than having each member of the class bring a separate lawsuit, the statement added.

Anybody who wishes to make a written comment on the lawsuit must submit their comment by Nov. 30 to the notice administrator at 2011 Manitoba Flood Class Action, PO Box 4454, Toronto Station A, 25 The Esplanade, Toronto, ON M5W 4B1. Anybody who opts out of the settlement – which also must be done by Nov. 30 – will not be entitled to any payment under the settlement, but keeps their legal right to sue on the same claims made in the lawsuit. By doing nothing, one is entitled to participate in the settlement, but gives up any rights to sue.

According to the Manitoba 2011 Flood Review Task Force Report, released in April 2013, more than 650 provincial and municipal roads were damaged during the event, as well as nearly 600 bridges, disrupting transportation networks throughout the province. “As this report is being prepared, costs associated with flood preparation, flood fighting, repair to infrastructure and disaster payments has reached at least $1.2 billion,” the document said.

At the height of the flood, there were more than 7,100 evacuees, primarily from First Nations communities. “The 2011 Manitoba flood was of a scope and severity never before experienced, in recorded history, in this province,” the report said.

The task forces issued 126 recommendations related to: evaluation of the operation of water control structures; suggested procedures for undertaking flood mitigation measures; a review of the province’s flood forecasting system; flood preparedness, flood fighting capacity and response; adequacy of existing flood control infrastructure; environmental impacts; land use policies and zoning; communications to the public; impacts on road networks and bridges to businesses and public access; and First Nations and flooding.

With regard to First Nations and flooding, “during the course of its work, it became apparent to the Manitoba 2011 Flood Review Task Force that First Nations’ concerns and issues needed to be dealt with as a standalone consideration.” At the heart of decisions related to the event is the “question of who has the responsibility to do what in relation to First Nations communities and reserve lands,” the report found.

While jurisdiction is clearly the root of many problems, other key issues included “distress over the length of time their communities have been obliged to spend away from their homes,” concern over flood damage to areas of recreational and spiritual significance, and the lack of on-reserve drainage.