Justin Trudeau has announced a joint federal and Ontario government investment in the Ford Motor Company of Canada, part of which will help establish a new research and engineering centre focusing on connectivity research and development. 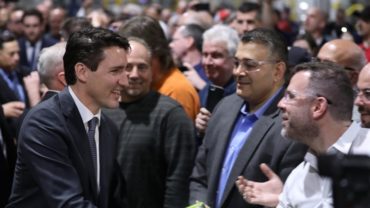 Prime Minister Justin Trudeau has announced a $102.4 million investment to Ford Canada, with the Ontario government contributing an additional $102.4 million in support of the project. Photo: Government of Canada.

Prime Minister Justin Trudeau announced the investment of $102.4 million to Ford Canada in a statement on Thursday. The Government of Ontario will contribute an additional $102.4 million in support of this project, the statement said, adding that these investments “will attract an additional $1 billion in research and development spending from Ford of Canada, and lead to the creation and maintenance of almost 800 good, middle class jobs for Canadian workers.”

The funding will also help establish the new Research and Engineering Centre in Ottawa, with additional locations in the Ontario communities of Waterloo and Oakville, which will focus on connectivity research and development across infotainment, in-vehicle modems, gateway modules, driver-assist features and self-driving cars.

“Today’s announcement will help Ford of Canada transform its Windsor operations into a world-class engine facility,” the release said, adding that the investments will also strengthen Ford Canada’s research and development capacity at existing facilities, including the Powertrain Engineering Research and Development Centre in Windsor, Ont., which develops technologies to make vehicles lighter and more fuel efficient.

“This is about positioning Canada as a global centre for automotive innovation, creating better opportunities for Canadians, and keeping Canada’s automotive manufacturing sector competitive,” Trudeau said in the statement.

Mark Buzzell, president and CEO of Ford Canada, added that the investment “demonstrates how Ford is transforming to be both an auto and mobility company. With strategic partnerships, Canada can compete and win in the global auto industry.”

The federal investment comes from the Government of Canada’s Automotive Innovation Fund.

According to the federal government, Canada’s automotive industry is the country’s second largest manufacturing sector, producing more than 2.3 million vehicles every year and contributing $17.5 billion annually to the Canadian economy. The sector employs more than half a million Canadians and for every assembly job, “it creates six spinoff jobs.”