OTTAWA – The federal government quietly spent $75 million to settle with victims and creditors affected by the Lac-Megantic rail disaster – a contribution that also shielded it from lawsuits related to the deadly crash.

Former transport minister Lisa Raitt said the deal, which involved 24 other defendants who settled, was under negotiation before her Conservatives lost the October election to the Liberals. 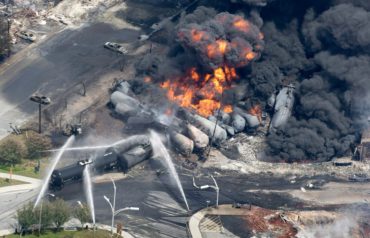 Smoke rises from tanker cars in downtown Lac-Megantic, Que., on July 6, 2013. The Transportation Safety Board says the country’s two largest railways and the regional carrier responsible for the Lac-Megantic fire failed to meet their obligations for filing accident information.The federal agency says a total of 254 accidents were unreported or reported late to the TSB over a seven-year period. THE CANADIAN PRESS/Paul Chiasson

The Liberals have refused to reveal how much the government gave to the $460-million settlement fund, even though at least two parties accused of wrongdoing in the deadly Quebec derailment disclosed their contributions.

But in a recent interview Raitt said the amount was public.

She said it was included in Transport Canada’s supplementary estimates as well as in its quarterly financial report under “out-of-court settlement.” The amount listed is $75 million.

Last week, Transport Minister Marc Garneau said the figure was “classified” when asked how much taxpayer money the government set aside for the settlement.

Garneau also reiterated Ottawa’s denial – under both the Liberals and the Tories – that it had any legal responsibility for the 2013 oil-train accident that killed 47 people and levelled part of Lac-Megantic.

“We don’t acknowledge that we had any responsibility; however, we did want to make a contribution because of the impact of this terrible tragedy in Lac-Megantic,” Garneau said last week.

Raitt agreed that the government’s main goal behind the settlement was to speed up the process.

“The motivation was simple: this was an opportunity to get money to the victims for wrongful death in a shorter period of time through the U.S. bankruptcy proceedings as opposed to a long, drawn-out, litigious court case,” Raitt said in a recent interview.

The government’s decision to settle may have also been made to avoid the cost of fighting the allegations in court. It would have faced numerous lawsuits related to the derailment on both sides of the border, said the U.S.-based bankruptcy trustee for the company at the centre of the crash – Montreal, Maine & Atlantic Railway.

Robert Keach has also said that, contractually speaking, the arrangement explicitly stated the settling parties were not acknowledging any liability with their contributions.

The Transportation Safety Board’s 2014 report on the crash said Transport Canada failed to recognize that the railway had urgent safety problems and was not following the rules. It also said the department failed to audit safety procedures at MM&A and didn’t conduct enough inspections.

Raitt responded to the TSB report at the time by saying the government’s role was to put the rules in place. The companies, the Conservative minister added, were expected to follow those regulations – something she said MM&A did not do.

In the recent interview, Raitt reiterated the position that the rules weren’t respected.

“We don’t believe we are liable and it’s not an admission of liability,” said Raitt, who added she would have publicly disclosed the government’s settlement contribution.

Irving Oil has announced it had contributed $75 million to the fund. The train was transporting crude oil to Irving’s refinery in Saint John, N.B.

World Fuel Services Corp., the U.S. company that owned the oil aboard the train, announced a few months later that it provided US$110 million toward the settlement.