Total global economic losses from disasters were US$44 billion in the first half of 2017, down significantly from US$117 billion in H1 2016, as a result of fewer and less intense events, according to preliminary sigma estimates from Swiss Re. 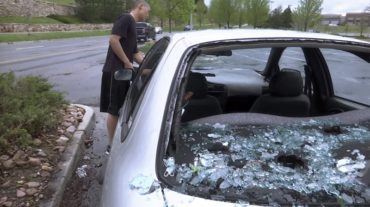 Patrick Clark inspects his damaged car after a strong spring storm moved through the metropolitan Denver area Monday afternoon, May 8, 2017. The storm moved quickly through downtown Denver, creating rivers of hail and a layer of ice on Coors Field ahead of a Colorado Rockies baseball game. (AP Photo/P. Solomon Banda)

The US$44 billion in global economic losses from natural catastrophes and man-made disasters in the first six months of the year was well below the first half annual average of US$120 billion in the last 10 years and significantly lower than the same period a year ago, Swiss Re said in a statement on Thursday.

Of the total losses in the first half 2017, US$23 billion were covered by insurance, the reinsurer reported, down from U$36 billion in H1 2016. Overall, a series of severe thunderstorms in the United States caused some of the largest losses (over US$4 billion). Globally, approximately 4,400 people lost their lives or went missing in disaster events, compared with 4,800 in the first six months of 2016. “That is low relative to recent years, but the toll may rise once estimates on the number of victims of Europe’s severe June heat waves are included,” Swiss Re suggested in the statement.

Out of the US$44 billion total global economic losses, natural catastrophes alone accounted for US$41 billion in the first half of 2017, compared with US$110 billion in H1 2016, while the remaining amount came from man-made disasters. Global insured losses from nat cats fell to US$20 billion from US$30 billion the year before, while insured losses from man-made disasters were about US$3 billion, down from US$6 billion a year ago. 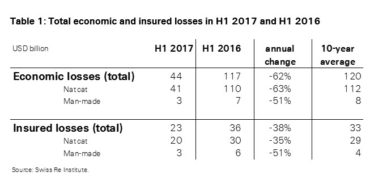 As for the biggest losses in the first six months of the year (the severe convective storms in the U.S.), four separate severe weather events from February to May each caused insured losses of more than US$1 billion. The most intense and costly event was a four-day long storm in May, with heavy damage to property inflicted by hail in Colorado and strong winds in other parts of southern and central states. The economic losses of this storm alone were US$2.2 billion, with insured losses of US$1.9 billion, Swiss Re reported.

A high number of smaller storms and other weather events (such as floods) in the U.S. in the first six months of 2017 led to insured losses of around US$16 billion out of the overall US$23 billion in insured losses. “Fortunately, in the U.S., most households and businesses are insured against wind risk so they are financially protected when severe storms strike,” said Swiss Re’s chief economist Kurt Karl in the statement.

Outside of the U.S., the largest and most costly insurance event was Cyclone Debbie, a Category 4 tropical cyclone that hit the northeastern coast of Australia in late March. Wind gusts of up to 263 kilometres per hour and widespread flooding in central and southeast Queensland and northeast New South Wales during the following days led to insured losses of US$1.3 billion. 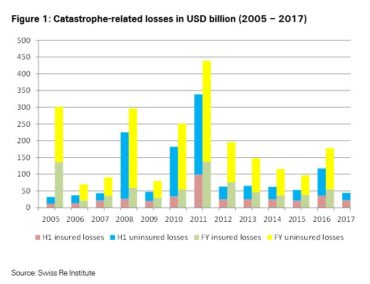 Other large events in the first half of the year included floods in Peru, and severe frost damage in late spring in the southeastern part of the U.S. and in Europe. At the beginning of the year, there was also a cold spell throughout Europe that claimed dozens of hypothermia victims. This was followed by a summer of heat waves and record temperatures in several European locations, making 2017 so far a year of weather extremes, the statement said. High temperatures and dry weather have continued through the northern hemisphere’s summer season, igniting wildfires in many parts of the world, including British Columbia.