BROOKS, Alta. – A fast-moving weather system in Alberta brought both fire and ice, resulting in the evacuation of a village one day and a multi-vehicle collision that closed the Trans-Canada Highway between Medicine Hat and Calgary the next.

About 275 residents in Carmangay, which is 165 kilometres southeast of Calgary, were forced to leave Sunday due to a grass fire, which was driven by winds over 90 km/h.

“The fire is out,” Jason Schneider, reeve of the County of Vulcan, said Monday. “They were able to stop the fire about seven miles out of town and, in the end, it was just kind of a precautionary evacuation and everything was fine and they were able to go home.

“With that wind, it was about 93 kilometres an hour, we knew there wasn’t much stopping it unless we got lucky.”

Schneider said the wind shifted toward a lake and a large fireguard was created that was able to hold it. The arrival of snow six hours later was a blessing, he said, because it put out any smouldering hot spots.

But that wasn’t before the fire levelled four homes and eight people were treated for smoke inhalation. 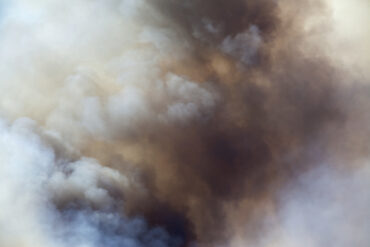 Staff with the Municipal District of Willow Creek told CTV News that three of the homes were occupied as the fire approached. One person was seriously burned and was taken to a Calgary hospital. Two patients were taken to a local hospital and later released.

The municipal district also confirmed several farm structures were lost in the blaze and livestock was taken to the Agriplex in Claresholm, Alta. The town’s veterinary clinic was on standby to treat any animals in need of medical assistance.

The strong winds, combined with the snow, led to highway chaos in other areas by Monday.

RCMP said an estimated 70 vehicles were involved in a collision around 8 a.m. on Highway 1 near Brooks, Alta. Five people were hurt, police said, suffering injuries ranging from minor to serious, although none were life-threatening.

Traffic remained blocked in the westbound lanes of the Trans-Canada Highway until late Monday afternoon, prompting the city to set up a reception area at a local hotel.

“Out on the highways there’s areas of zero visibility, icy slippery highways and blowing snow.”

Environment Canada had weather warnings in effect for much of southern and eastern Alberta.

Related: Up to 70 vehicles: Crash halts traffic on Trans-Canada Highway in southern Alberta

They ranged from wind warnings in the Brooks area – with gusts up to 100 km/h – to a winter storm warning around Lloydminster, where high winds and heavy snowfall were expected.

Keibel said the combination of the grass fire and icy roads was a handful for officers in southern Alberta.

“Alberta is somewhat famous and known for its rapidly changing weather conditions.”

Environment Canada senior climatologist Dave Phillips said the province was hit by an Alberta Clipper, a fast-moving, low-pressure weather system that leads to a sudden temperature drop and sharp winds.

“This may be winter’s last hurrah. It isn’t something that is terribly surprising at all,” said Phillips.

Phillips said it brought some snow with it and moved quickly across the Prairies.

“It’s kind of a here-today, gone-tomorrow type of thing,” he added.

– By Bill Graveland in Calgary, with files from CTV Calgary