SHAMATTAWA, Man. – A fire that destroyed the only food store on a remote northern Manitoba reserve was set by six children, five of whom are under 12, RCMP said Friday. 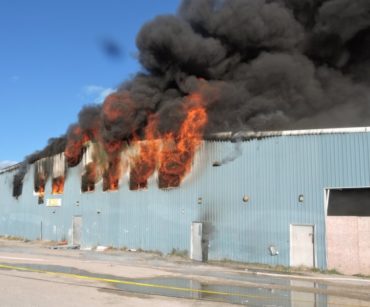 A fire at the Shamattawa First Nation was set by six children, five of whom are under 12 years of age. Photo: @rcmpmb.

The community of 1,500 was left without supplies or emergency services when the blaze erupted Thursday afternoon, gutting the Northern store as well as the adjacent band office, radio station and 9-1-1 centre.

RCMP said their investigation led them to six youths, five of whom are too young to face charges because they are under 12 years old. The other child, a 12-year-old boy, was arrested and released on a promise to appear in court.

There were no reported injuries but the fire prompted an urgent response from the Red Cross.

“We’re sending up the immediate needs this morning … and the chief and council along with the Northern stores are identifying a secondary place to set up a temporary store,” Shawn Feely, Red Cross Manitoba vice-president, said Friday.

“At this point in time, their immediate need is for supplies for infants – baby food, formula, diapers, that sort of thing.”

The Red Cross, which acts on behalf of the federal government for emergencies in remote First Nations, was stocking two airplanes – one commercial plane and one charter – with supplies and sending them 700 kilometres from Winnipeg.

The weather was good Friday and Feely was confident all the urgently needed supplies would arrive before day’s end.

Manitoba #RCMP is reporting the arrest of youth in relation to Shamattawa First Nation fire. More to come. pic.twitter.com/fiNKJXisNB

The fire is devastating for Shamattawa, said Grand Chief Sheila North Wilson of Manitoba Keewatinowi Okimakanak, which represents First Nations communities across the northern part of the province.

Because the community is only accessible by air, with the exception of a winter road some 190 kilometres long that is only open for a few months, rebuilding could be expensive and time-consuming, she said.

“They’ll have to ship supplies and materials in through the airlines, otherwise wait for the winter road,” North Wilson said.

“And even with that (winter road), building material won’t get up there until, at the earliest, mid-February. And building can’t start until the ground has thawed out a bit.”

– by Steve Lambert in Winnipeg

Help our friends in Shamattawa. Donations accepted from 6pm on at 470 Selkirk or at 1445 Pembina all day pic.twitter.com/ZdaqmCwP5Y