JOHN’S, N.L. – A massive, fast-moving fire at a public housing complex has forced about 35 people out of their homes in a blaze that sent large plumes of smoke billowing above St. John’s, N.L. 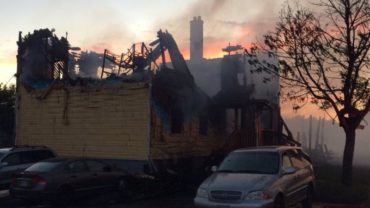 The fire forced 35 people from their homes. Credit: @newsaCANADA.

Fire platoon Chief Brian Tucker said Tuesday they were called to the Newfoundland and Labrador Housing Authority apartment units on Froude Avenue at about 6 p.m. Monday, finding flames spewing out of the second storey.

“We were there three to four minutes after it started and it was fully engulfed,” he said from the scene, where firefighters were cleaning up and monitoring hot spots. “The fire spread very rapidly.”

Everyone in the 12-unit complex was evacuated, but Tucker said one person was taken to hospital to be treated for possible smoke inhalation and other injuries. He said some pets were reported missing.

The scene from up close and from far away: smoke from Froude Avenue fire visible all over St. John's @CBCNL pic.twitter.com/3Ubx2Ye5wW

He said the apartment complex was destroyed and had pancaked in on itself, adding that crews may have to bring in additional equipment to tear down the remaining building.

Tucker said firefighters had issues with the water supply and had to call in a water tanker for extra support. He said they didn’t have enough water because of the way the water lines are looped between different hydrants.

“We did have a bit of an issue with water. With a big fire, we need big water and big water was not available to us here,” he said. “So we brought in our tanker.”

@NTVNewsNL Skycam showing the smoke from a reported house fire on Froude Avenue in St. John's. News department is on scene. #nltraffic pic.twitter.com/UK0kneADnB

He said they determined there was little hope of saving the first building and concentrated on fighting the fire in another one. He says they had it under control by about 11:30 p.m.

Hundreds of people lined the streets to watch the blaze, with many being driven from their nearby homes due to smoke. The siding on several neighbouring houses melted due to the extreme heat.

“There was a big crowd…(the smoke) was noticeable from all over town,” Tucker said.

The Canadian Red Cross said it was assisting the 35 residents from 13 families, including adults and children who lived in the three buildings that each four townhouse apartments. It said the housing authority was putting the tenants up at hotels and that some were staying with friends and family.

Everyone being pushed back now. Flankers are reaching the crowd here. #cbcnl pic.twitter.com/bJHWZCXLTt