An abundance of technology is available to prevent water damage in condo buildings, but panellists of a recent Canadian Underwriter webinar questioned why it’s not being mandated or put to use as condo claims continue to increase.

Existing technology such as a water detection system can be installed, observed Jeff Rodin, president and CEO of Condominium Insurance Solutions. This would not only shut off the water when the system is triggered, but also send out an alert that something is amiss. Such an alert can go to an entire network of people, like the unit owner, property manager, security, concierge, and superintendent, he said.

“Everybody would get notified,” Rodin explained during the webinar, Build Up Your Condo Business: How to Succeed in Today’s Condo Insurance Market.

If a water detection system detected a water leak and ultimately shut it off, that would reduce damage “to a point where it should just be a mop-up, and underneath the deductible,” Rodin said. “That would benefit everybody involved.”

Not only would that spare “the unit owner from the pain that they’re going to suffer having to go through an extensive claim,” Rodin said, it would help the condo corporation reduce water damage in the common areas. 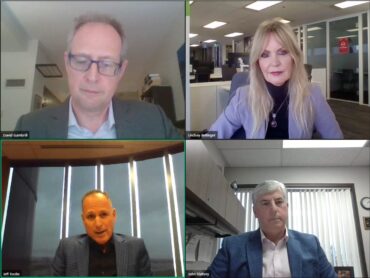 Clockwise from top left, moderator David Gambrill from Canadian Underwriter, John Slattery from Sedgwick, Jess Rodin from Condominium Insurance Solutions and Lindsey Bellinger from Aviva take part in the CU webinar “Build Up Your Condo Business: How to Succeed in Today’s Condo Insurance Market” on Oct. 27.

Rodin hoped his pleas would reach the decisionmakers at Canadian insurance companies. He noted insurers in the past have required high-end residential customers to install fire and burglar alarms to obtain coverage.

In the same way, insurers should mandate water detection devices so that homeowners aren’t being relied upon to take up the cause. With the installation of such devices, Rodin predicted, insurers are going to see a huge reduction in common water damage claims such the overflowing of toilets, the breaking of a braided hose in a dishwasher, and washing machine leakage. “They’re going see all those claims — I’m not going to say disappear — but hugely mitigated,” he said. “Hugely reduced.”

Earlier in the webinar, Bellinger pointed out that only 25% of the condo insurance market is making claims to their insurers. The majority of the issues, she said, are taking place in major cities.