LOS ANGELES – The worst area of drought in California has significantly narrowed to a small region northwest of Los Angeles that has stubbornly failed to benefit from Pacific storms that have drenched much of the state since the fall and were lining up again Wednesday. 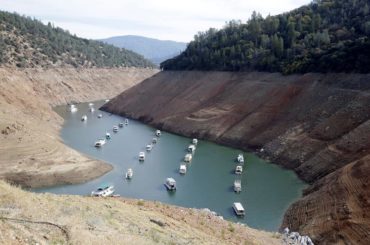 FILE – In this Thursday, Oct. 30, 2014 file photo, houseboats sit in the drought lowered waters of Oroville Lake, near Oroville, Calif. More than 40 percent of California has emerged from a punishing drought that covered the whole state a year ago, federal drought-watchers said Thursday, Jan. 12, 2017 a stunning transformation caused by an unrelenting series of storms in the North that filled lakes, overflowed rivers and buried mountains in snow. (AP Photo/Rich Pedroncelli, File)

Just 2.1 per cent of the state is now deemed to be in “exceptional drought” – a far cry from a year earlier when that label applied to a vast region stretching from greater Los Angeles hundreds of miles up the state’s core to far northern counties.

The last remaining region still in the U.S. Drought Monitor’s most dire category extends from northwestern Los Angeles County and southernmost Kern County westward across much of Ventura County to the south coast of Santa Barbara County.

While storm runoff has been spilling into reservoirs elsewhere in California, long-suffering Lake Cachuma on the Santa Ynez River 25 miles northwest of the city of Santa Barbara still embodies the drought that gripped the state for more than five years.

The reservoir, created by a dam built in the 1950s, was only at about 9 per cent of capacity Wednesday, its barren banks rising well above a surface that is more than 100 feet below the spillway.

The problem remains essentially two-fold: Even with as much rain as Southern California has been getting lately, the heaviest precipitation has remained to the north and the ground is so dry that it continues to absorb rain without reaching the saturation point at which water remains on the surface and flows out of Lake Cachuma’s drainage area.

“With a drought that’s lasted as long as it has, the ground is like a big sponge and it can soak up a lot of water,” said Stuart Seto, a weather specialist at the National Weather Service office in Ventura County.

The new series of storms could drop 5 inches to 10 inches of rain in local mountains, which Fayram said would not be a drought buster but would further saturate the watershed.

“If that happens we’re predicting the most inflow into Cachuma that we’ve seen since 2011,” Fayram said. That, however, would only raise the lake a few feet.

Overall, California has seen a significant retreat from the once-statewide drought. About 58 per cent of the state remains in moderate, severe, extreme or exceptional stages of drought.

Rain and wind in San Francisco heralded landfall Wednesday of the first of three more storms that forecasters said would spread through the entire state, bringing precipitation into early next week, with brief breaks between systems.

Dozens of flights were cancelled at San Francisco International Airport and Muir Woods National Park in Marin County was closed for safety after several redwood trees were blown down. Near Lake Tahoe, Caltrans reported a 4-mile stretch of Highway 89 on either side of Emerald Bay remained closed, with some sections buried in up to 30 feet of snow.

In suburban San Francisco, Orinda city officials declared a local state of emergency to secure funds to fix a giant sinkhole that opened in a road during previous heavy rain.

Flood advisories and watches were posted on the far north coast. Winter storm warnings were issued up and down the length of the Sierra Nevada and for the mountain ranges of Southern California, where forecasters warned that mud and debris flows could occur if heavy rains fell on wildfire burn scars.

“A prolonged event of this nature has the potential to produce flows in local rivers not seen since 2010,” the weather service said.

Kristin J. Bender and Janie Har in San Francisco contributed to this report.