KAMLOOPS, B.C. – Fire has heavily damaged a dairy operation in Kamloops, British Columbia, that processes milk from farmers across the North Thompson and Shuswap Okanagan. 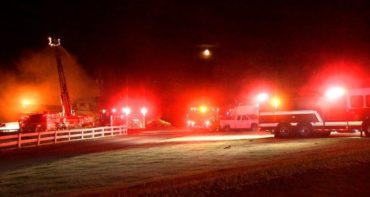 Fire officials say the main production facility at Blackwell Dairy was destroyed in the late-night blaze.

Kamloops Fire and Rescue Capt. Jeff Bell says crews were met by towering flames, heavy smoke and small explosions of gas tanks or tires as they arrived at the facility in Barnhartvale on Kamloops’ east side.

He says the fire was “ugly,” because transport trucks parked next to the building were also blazing and spilled diesel fuel created rivers of fire running down the road.

No one was injured and no livestock were lost but a cause of the fire has not been determined and Bell says an investigation is continuing.

The Blackwell Dairy website says its line of milk, sour cream and cheeses is sold in communities across southern and southeastern B.C. (CFJC, CHNL)