Flammable liquid risk should be top of mind for these clients

Commercial clients looking for ways of managing wildfire risk should turn their mind at some point to flammable liquid storage.

“You wouldn’t want a gas can right up against the building,” said Scott Steinmetz, global head of risk control, MidCorp at Allianz Global Corporate & Specialty, in a recent interview. 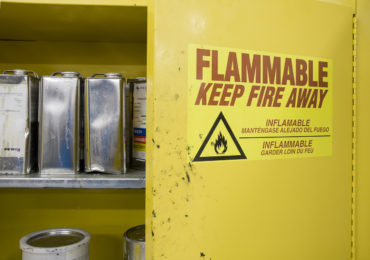 Clients in areas subject to wildfires – whether they are homeowners, small retailers or larger commercial property managers – need to understand how flammable liquids must be separated into different compartments, contained and organized, suggested Steinmetz.

“You really want any kinds of stored fuel – like gasoline or its vapours – you want to understand how to manage that well,” he said. “In some cases it may mean removing some of those flammable liquids and placing them further on, where they would not pose as great a risk to something like a wildfire.”

In British Columbia, the Eagle Bluff fire south of Okanagan Falls has grown to nearly 27 square kilometres in size, The Canadian Press reported this past Saturday.

In Greece, at least 141 firefighters with 46 vehicles were fighting a fire just outside Athens, the Associated Press reported Tuesday.

Wildfire caused Canada’s most expensive insured loss, of about $4 billion, in 2016. At that time the entire city of Fort McMurray, Alta. was evacuated.

Worldwide, direct economic losses from wildfires rose from US$6 billion in 2016 to US$21 billion in 2017, Swiss Re reported earlier.

In a release July 31, AGCS and the I.I.I. advise clients to establish and maintain a five-foot “no-burn zone” around the property.

In this five-foot zone, there should be no wood piles, Steinmetz told Canadian Underwriter in an interview.

In the zone out to 30 feet from the building, clients should remove all vegetation – such as plants, grass and weeds – if that vegetation is either dead or not well hydrated.

Out to 100 feet from the building, you want to make sure grass is not more than four inches high and there is horizontal space between trees and bushes, AGCS advises.

“The idea of horizontal separation is so you don’t get a bush on fire that transfers to another one because they are too close,” said Steinmetz.

By the same token, you want to make sure there is vertical separation between a bush if it is under tree branches.

“If a bush starts on fire, and it’s right below a low-hanging tree, and it transfers the fire from the bush to the tree, and it transmits it higher up into a larger tree – that is what you are trying to eliminate,” said Steinmetz.