Flight-following software ‘not used as intended’ as airplane hit by severe turbulence in thunderstorm: TSB

The Transportation Safety Board of Canada recently released an investigation report into a severe turbulence incident in southwestern Ontario, in which the crew of an American airline flew into a line of thunderstorms, temporarily lost control of their airplane and reacted “contrary to known aircraft upset recovery techniques.” 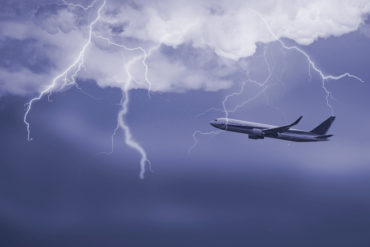 On September, 5, 2014, a crew with ExpressJet were flying an Embraer EMB-145LR on Flight 4538 from Grand Rapids, Mich. enroute to Newark Liberty International Airport, in New Jersey west of New York City.

The flight went through Canadian airspace and the Toronto Area Control Centre reported the incident to TSB, the board said in an investigation report released July 6.

ExpressJet 4538 departed Grand Rapids at 6:45 p.m. and “deviated 50 nautical miles north-northeast of the airport,” then turning east, “paralleling a line of thunderstorms south of its position.” After 7 p.m., the airplane encountered severe turbulence west of London, Ont.  The flight continued on to its final destination, in Newark, N.J. No one was injured.

TSB found that at one point, in Canada, the crew lost control of the airplane, and the crew “momentarily applied flight control inputs that exacerbated the roll attitude of the aircraft.”

The crew “operated the aircraft through a mature thunderstorm,” TSB stated in its investigation report.

The EMB-145 is powered by two Rolls Royce AE3007 turbofan engines and carries 50 passengers, according to the United Airlines website.

“The flight path reconstruction, when overlaid and time-synchronized with the graphical weather depiction, clearly indicated that the aircraft encountered the turbulent convective air associated with towering cumulonimbus clouds,” TSB stated in its report.

“The thunderstorms encountered during the occurrence were associated with a cold front,” TSB added. “Frontal thunderstorms usually form a line that may extend for hundreds of miles. They pose a special hazard to pilots because they are often embedded in other cloud decks and are therefore impossible to see. An advancing line of frontal thunderstorms should be avoided.”

TSB noted that at 7:08 pm, the crew of ExpressJet 4538 “communicated with the company dispatch via the aircraft communication and recording system to request a route through the weather system, stating that they needed help picking their way through the storms and that the gaps between storm cells were closing quickly.”

However, “the flight-following software was not used as intended (i.e., as a proactive tool to avoid weather), but rather as a reactive response to a thunderstorm encounter,” TSB stated. “Had the flight crew requested dispatch assistance earlier, a suggestion to help them avoid the weather system completely may have been provided.”

The company dispatcher “provided an opinion on which route to take, based on what he observed on his display and his assessment of the weather,” TSB noted adding that according to the information available to the dispatcher, “the route was feasible, given the aircraft position and the location of the adverse weather.”

However, TBS obtained a depiction, as of 7:16 pm, from the U.S. National Oceanic and Atmospheric Administration’s weather service, of the weather between Chicago and Toronto generated by a composite reflectivity radar source, using the maximum reflectivity from all of the multiple elevation angles.

The TSB investigation depicts the difference between the NOAA map and ExpressJet’s own flight-following/weather software.

At 7:16 p.m., after reaching 37,600 feet above sea level, “the aircraft pitched to 11° nose down and rolled 30° to the right,” TSB noted. The turbulence continued and the aircraft encountered severe icing.

It descended at 4,400 feet per minute and banked 42 degrees to the right.

“Using the flight controls, the flight crew applied right roll inputs,” TSB stated. “As a result, the right bank angle increased from 42° to 77°. The roll inputs by the flight crew during the uncommanded descent were contrary to known aircraft upset recovery techniques. The correct technique is to roll the aircraft in the shortest direction to wings-level.”

The airplane exceeded its maximum operating mach number (0.78), which TSB says is the “speed over which the aircraft encroaches on structural and aerodynamic design limits.”

The cockpit voice recorder was not quarantined after the flight and was overwritten, TSB noted.

As a result of an internal investigation, ExpressJet “has improved the dispatcher use of flight-following software,” TSB stated. “Additional focus has been placed on using the lightning-strike functionality of the weather portion of the software.”