Flood losses in the wake of storms Elvira and Friederike in late May and early June are not expected to result in ratings actions, but it is anticipated they will hit first-half results for French and German insurers, notes a briefing from A.M. Best.

The storms – which hit the countries in quick succession from late May to early June – could result in estimated flood-related insured losses of about 0.9 billion euros to 1.4 billion euros for the French market and approximately 1.2 billion euros for German insurers, A.M. Best reports in a statement Friday. 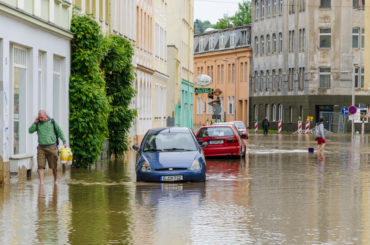 “The disparity between economic and insured losses will be greater in Germany than in France, owing to lower levels of flood insurance penetration,” the rating agency reports.

“The market is expecting some 150,000 claims, with the large personal lines insurers providing property and motor insurance to most affected,” Alex Rafferty, financial analyst and contributor to the briefing, comments in the statement.

“Caisse Centrale de Réassurance expects the recent floods to be the largest insured natural catastrophe loss incurred since 1982, with the state-backed reinsurer taking a significant share of the total market loss,” Rafferty continues.

Despite the impact, “A.M. Best does not anticipate any negative rating actions on the insurers it rates as the flood events are not likely to drive a material deterioration in full-year 2016 performance or affect capitalization.”

With Germany having no government-backed or formalized natural catastrophe scheme, the briefing notes coverage for flood may be added as a policy extension. That said, “this additional protection often results in a notable increase in premium, particularly for risks domiciled in flood-prone areas of the country. Consequently, the average penetration rate for flood protection is relatively low.”

Although residual waters have yet to disperse in some of the most severely hit parts of the country, “the localized nature of the flooding in Germany means that small regional insurers are likely to be disproportionately affected,” says Myles Gould, senior financial analyst and co-contributor to the briefing.

For most insurers with exposure to the German floods, “losses are unlikely to be sufficiently high to hit their catastrophe excess of loss programs, although for those with proportional reinsurance coverage, some of the losses will be passed to reinsurers,” Gould points out.

In early June, Fitch Ratings issued an estimate that insurance claims linked to the recent flooding in Germany are likely to reach about 1 billion euros, adding only about a third of home insurance policies in Germany include natural hazard cover. “Claims on this scale would weaken underwriting profitability for the sector, but would be unlikely to threaten credit profiles,” the rating agency notes.

“Most claims are likely to be on homeowners’, contents and motor insurance policies, as well as, to a lesser extent, business interruption insurance,” notes a statement from Fitch Rating. “Insurers with high market shares in the homeowners’ and motor sectors are likely to see the biggest impact,” including public-sector insurers that are active in the hardest-hit regions.

Since much of the recent flooding has hit areas not considered to be at high risk for flooding, “the proportion of homes covered could, therefore, be higher than in the last major German floods in 2013,” Fitch Ratings reports.

“Insured losses of 1 billion euros would be equivalent to the entire expected natural catastrophe losses that are factored into our 2016 forecasts, although excess-of-loss reinsurance cover will cushion the impact,” the statement adds.

Also in early June, Aon Benfield reported in its Global Catastrophe Recap for May that noted global disasters that month led to at least US$7 billion in claims.

The convective storms and widespread flooding from Elvira “swept across parts of northern Europe between late May and early June, killing at least 17 people. The most considerable damage was noted in Germany, France, Austria, Poland and Belgium, where floods impacted many major metropolitan regions, including Paris. As many as 150,000 claims were anticipated in France,” the report states.

Related: Global disasters in May, including Fort McMurray wildfire, leading to US$7 billion in claims: Aon Benfield