The government of Saskatchewan announced on Thursday that a temporary Provincial Disaster Assistance Program (PDAP) flood recovery centre will open in the city of Estevan to provide immediate support and advice to residents affected by recent severe weather and flooding. 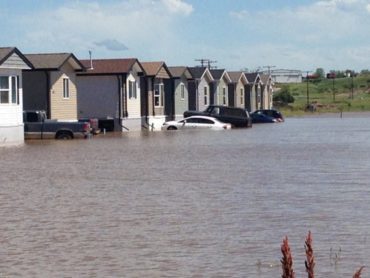 “I would like to commend the community for their resilience and for the many acts of selflessness demonstrated over the last number of days,” Government Relations Minister Jim Reiter said in a media release. “In the wake of such intense flooding, with so many homes affected, this centre will help the residents of Estevan begin the process of recovery.”

As of July 12, “water levels had fallen significantly, down from the 125 millimetres (mm) of rain that poured down on the city the day before,” the Weather Network reported at the time. “Two-day rainfall totals could be as high as 75 mm to 100 mm by Wednesday morning in some areas of the southern Saskatchewan,” the update noted, citing information from an Environment Canada rainfall warning. “The stalled low pressure system will begin to slowly push east into south-central Manitoba Tuesday giving additional rainfall amounts to some places there as well.”

The Saskatchewan government pointed out that PDAP is designed to help residents, small businesses, agricultural operations, communal organizations, non-profit organizations, parks and communities recover from the effects of natural disasters, including flooding, tornadoes, plow-winds and other severe weather.

The centre will be staffed with PDAP officials who can begin the claims process for area residents affected by the recent severe weather, which saw more than 100 mm of rain and flash-flooding in some regions of the province. A provincial building official will also be available onsite to answer questions related to structural safety and building concerns, the release said.

The recovery centre is located at 701 Souris Avenue in the Leisure Services conference room.

A PDAP flood recovery centre is also planned to open in the Town of Arborfield next week, the release added.

The government also said that businesses directly impacted by the recent flooding activity can apply for relief from penalty and interest charges for filing late provincial sales tax (PST) returns.

“We recognize the challenges and hardship that extreme emergency situations such as forest fires and floods can cause for business people in the affected areas,” Finance Minister Kevin Doherty said in a separate release.  “If they are unable to file their sales tax returns on time, we want to be flexible and provide penalty and interest relief on late tax returns for those businesses.”

Affected businesses must submit a written request for waiver of penalties and interest to the Ministry of Finance. Requests should include the business location and outline the circumstances of how the flood-related conditions prevented the PST return(s) from being filed on time. Requests should be marked as flood related and sent to the following address: Ministry of Finance, Revenue Division, Box 200, Regina SK, S4P 2Z6; email: sask.tax.info@gov.sk.ca; phone: 1-800-667-6102 (toll free) or 306-787-6645 (Regina); fax: 306-798-3045.