BEAUCEVILLE, Que. – A Quebec town that this week suffered its worst flooding in nearly 50 years is fearing more damage as rain is forecast in the coming days.

Officials in Beauceville, about 90 kilometres south of Quebec City, say they haven’t seen this type of flooding since 1971.

And with warmer weather and rain forecast to end the week, there are concerns the Chaudiere River could burst its banks again. 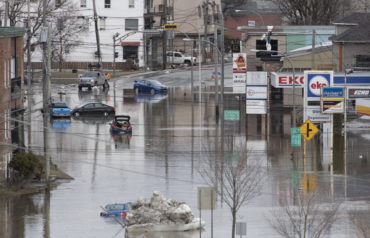 The Chaudiere River flooded and forced the evacuation of 230 buildings and 36 people in Beauceville Quebec.
THE CANADIAN PRESSJacques Boissinot

At least 230 buildings remained evacuated today, but the roads were mostly open, including the main street along the river.

The damage to homes was apparent, and some businesses remained closed. Mayor Francois Veilleux said it wasn’t immediately known if any evacuees would be allowed to return home today.

Forty-nine people had to leave their homes, and six roads were affected by the rising waters of the Chaudiere River.