Flooding forces 700 people out of their homes in Fort Simpson, N.W.T.

FORT SIMPSON, N.W.T. – A mayor in the Northwest Territories was watching for movement in slabs of ice and snow sitting on top of one of two rivers threatening his community on Tuesday.

About 700 of Fort Simpson’s 1,200 residents were forced from their homes after water levels rose dangerously on the weekend.

“On Fort Simpson island itself, probably 30 to 40 per cent of the island is underwater,” Mayor Sean Whelly said in an interview.

He said a mandatory evacuation order was issued Sunday, but about 50 residents remained in the village.

Whelly said it’s hard to assess how much damage has been done to homes.

“We’re not even sure what we’re looking at here yet. I know personally that people have suffered some losses.” 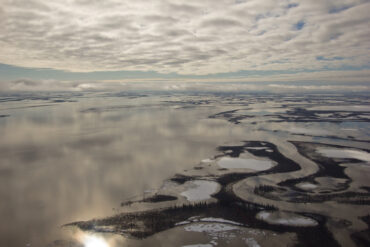 The mayor said water levels had dropped slightly on Tuesday, but the change might not last long.

“It looks like it’s coming back up again. I’m looking out down one of the side streets on the island and the water’s part way down the street here.”

The village sits at the intersection of the Mackenzie and Liard rivers, but the flooding has mostly been caused by breakup on the Liard. Ice on the Mackenzie was holding tight.

“We’re just hoping the Mackenzie doesn’t let loose. The two rivers combined together could give us a lot more problems than we’re having right now,” Whelly said.

“Every hour that we gain here while this ice pack has a chance to move is beneficial to us.”

Whelly said some people were flown to Fort Smith, N.W.T. – almost 700 kilometres away – where they were staying at the town’s recreation centre. Others were camping or staying with friends and family.

“Fort Smith really stepped up to take care of our evacuees,” Whelly said.

Some of the evacuation measures are precautionary, he said.

“If we do it while they’re safe and we know where everybody is, then we wait to see what happens. You wouldn’t want to be sleeping down here at night wondering if the Mackenzie River is going to break loose.

“If the ice were to come across and swamp the town somehow, we’d be struggling to get people off this island.”

The village was also ordering food and supplies, because flooding was preventing residents still there from getting to stores.

N.W.T. Premier Caroline Cochrane and Community Affairs Minister Paulie Chinna said in a statement that the government was prepared to step in to help with emergency response.

“As soon as it is safe to do so, 1/8Northwest Territories Housing Corp. 3/8 staff will travel to affected communities to meet with residents to discuss their needs and how the (government) can provide support,” the statement said.

“Affected communities and residents: We see you. We know you are struggling, and we are going to do everything we can to ensure that you are safe and have the supports you need.”

The last time Fort Simpson issued an evacuation order for flooding was in 1963, Whelly said. He also remembers high water levels in 1989, but the river “let go” before an evacuation was needed.

An evacuation order was also issued for Hay River, N.W.T., on Friday when ice breakup threatened to flood that community, but that order has been lifted.

By Emma Tranter in Iqaluit, Nunavut

This story was produced with the financial assistance of the Facebook and Canadian Press News Fellowship.