Flooding in Ontario and Quebec in April and May estimated to cost “well into the millions” in U.S. dollars: Aon Benfield

Flooding in multiple communities in southern Ontario and Quebec in April and into May is estimated to cost “well into the millions of dollars (USD)” in economic losses, Impact Forecasting said on Tuesday in its Global Catastrophe Recap report for April. 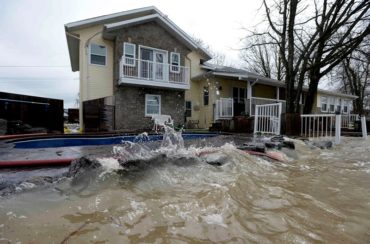 Rising water from the Ottawa River is nearly level with the deck and swimming pool at a home in Rockland, Ont., about 40 kilometres east of Ottawa, on Sunday, May 7, 2017. Insurance industry experts say many Canadian homeowners aren’t insured for flooding and could be left footing at least part of the bill after heavy rains hit parts of Quebec and Ontario. THE CANADIAN PRESS/Justin Tang

Impact Forecasting, Aon Benfield’s catastrophe model development team, said in its recap report that “an abnormally wet month of April” in parts of southern Ontario and Quebec led to widespread flooding in multiple communities through the early portion of May. “A series of storm systems originating in the United States led to excessive rainfall that combined with melting winter snow to allow several rivers to overflow their banks,” the report said. “In Quebec alone, the government noted that more than 1,300 homes were inundated by flooding across 124 cities and towns.”

In the United States, insurers face a multi-billion dollar bill from April weather damage, with U.S. severe weather remaining the biggest driver of global insurance losses in 2017, Aon Benfield noted in a statement. “Aggregated damages from these severe weather, and subsequent flood, events were likely to lead to a multi-billion dollar loss for public and private insurers, with the overall economic cost to the United States being significantly higher.”

The most severe outbreak, from late April into early May, featured a complex and broad storm weather system that spawned violent tornadoes, straight-line winds, large hail and excessive rainfall, killing 20 people in parts of the Plains, Midwest, Southeast, Mid-Atlantic and Northeast, Aon Benfield reported. Total economic losses from this event alone event were expected to exceed US$1 billion.

Elsewhere, Cyclone Debbie swept across parts of the South Pacific Islands, Australia and New Zealand from late March into the first weeks of April, killing at least 14 people. Eastern Australia was the worst impacted, with damage from high winds and widespread coastal and inland flooding resulting in an anticipated insured loss of US$970 million. The remnants of the cyclone would later trigger flooding in areas of New Zealand, where total insured losses were expected to breach tens of millions in U.S. dollars. Cyclone Debbie’s overall economic cost was estimated at around US$2 billion, the statement said.

“Much of the focus in April was once again on the United States, as powerful thunderstorms and excessive rainfall led to considerable impacts to central and eastern sections of the country,” Steve Bowen, Impact Forecasting director and meteorologist, said in the statement. “The insurance industry is facing another multi-billion dollar payout as tornadoes, large hail, straight-line winds and flooding left a large damage footprint. The industry in the U.S. is well on its way to facing its tenth consecutive year of annual payouts of US$10 billion or more for the severe convective storm peril. Beyond the U.S., insurers continued to assess the cost of wind and flood damage resulting from Cyclone Debbie in Australia and New Zealand.”