Flooding prompts state of emergency and evacuations in Brantford, Ont.

BRANTFORD, Ont. – Residents of a southern Ontario city were forced from their homes and businesses on Wednesday as rising flood waters from a local river prompted a state of emergency. 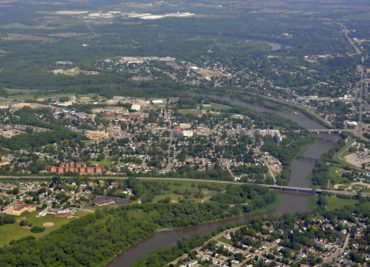 City Mayor Chris Friel said neighbourhoods immediately surrounding the river have been particularly impacted, adding the flooding has also closed nearby city trails and shuttered many local businesses and schools.

City officials said 4,900 residents and 2,000 homes were affected by an evacuation order issued to three neighbourhoods, and Friel said all residents should be keeping their distance from the flood zone for the foreseeable future.

“It is never worth your personal safety for a view of the river … stay away from the river,” he said at a news conference. “That is not just for today or this afternoon or this evening. That will be for the next couple days at least.”

Friel said the state of emergency went into effect mid Wednesday morning, adding that the river is still rising and is expected to peak later in the day.

Local roads and bridges were jammed as people began to make their way out of the three neighbourhoods covered under the evacuation order, he said.

City officials have dispatched someone to the Indigenous community of Six Nations, about an hour from Brantford, Ont., to share real-time information on flood conditions. Six Nations has already begun mobilizing its emergency co-ordination team in case flooding reaches the area, he added.

Friel said the Ontario government has been in contact with his community, and Municipal Affairs and Housing Minister Bill Mauro said a team is already en route to the city.

But Brantford was not the only community grappling with the Grand River’s rising water levels. Nearly 100 kilometres away near Orangeville, Ont., provincial Police said they were trying to extricate a vehicle that became submerged in the river after driving off a washed-out road.

Const. Paul Nancekivell, spokesman for OPP’s Dufferin Detachment, said the car went into the river just before 1:00 a.m. Wednesday where police had closed part of the road due to flooding.

“(The female driver) came southbound through the road closure, went on to the flooded area and from there her vehicle was pulled into the river,” he added. “She got out and the vehicle swept away.”

The woman is “safe and sound” after being treated in hospital for hypothermia, he added.

Grand Valley District Fire Chief Kevein McNeilly said conditions at the time of the incident were treacherous for all concerned.

“It was extremely foggy. Very, very violent river last night,” McNeilly said. “At one point it raised up three feet in a matter of 20 minutes.”