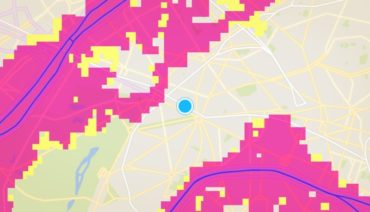 The Global Flood Map is available for use by businesses and the public at no cost. Credit: FM Global.

The interactive Global Flood Map “presents business executives with a powerful new strategic planning tool, and risk managers with a way to address natural hazard exposure around the world,” FM Global said in a press release. A version of the map is available for use by businesses and the public at no cost with a one-time registration per device.

The Global Flood Map provides a worldwide view of high- and moderate-hazard flood zones across the globe, even in areas where previously available information was unreliable, inconsistent or nonexistent, FM Global reported. Built on the experience of and data from more than 10 different external scientific, academic and governmental organizations, the map is meant to help accurately answer the question: Are your locations in or out of potential flood zones?

The map is physically-based, employing hydrologic and hydraulic models and reflecting data on rainfall, evaporation, snowmelt and terrain. “The model recreates what actually happens when rain falls or snow melts by incorporating phenomena such as soil filtration, water runoff and evaporation,” FM Global explained in a Frequently Asked Questions section on its website. “The model is then calibrated against known river flows for accuracy.” Rivers with watersheds less than 101 square kilometres are not included. The map also does not account for storm surges or local storm water runoffs, and, like most flood maps, does not recognize levees, bridges and culverts or account for dams or reservoirs.

“Flood is one of the costliest commercial property risks, and it’s only getting worse with climate change, globalization and urbanization,” said Brion Callori, senior vice president and manager of engineering and research at FM Global. “Companies with properties anywhere in the world can now quickly identify the base flood risk for all of their facilities on a globally consistent, apples-to-apples basis, at a resolution of just 90 metres by 90 metres.”

Among natural disasters, flooding was the costliest overall peril in 2016 for the fourth consecutive year in terms of global economic losses, accounting for US$62 billion in such losses, according to Aon Benfield’s 2016 Annual Global Climate and Catastrophe Report.

Established nearly two centuries ago, FM Global is one of the world’s largest commercial property insurers. Its capital, scientific research capability and engineering expertise are solely dedicated to property risk management and the resilience of its client-owners. These owners, who share the belief that the majority of property loss is preventable, represent many of the world’s largest organizations, including one of every three Fortune 1000 companies, the insurer reported.

FM Global will showcase the Global Flood Map at the upcoming RIMS 2017 Annual Conference from April 23-26 in Philadelphia.