Ford Motor Company has announced that it intends to have a “high-volume, fully autonomous SAE level 4-capable vehicle in commercial operation in 2021 in a ride-hailing or ride-sharing service.” 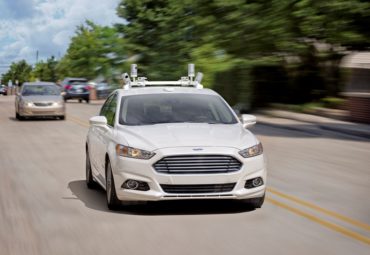 To get there, the Dearborn, Mich.-based company said in a statement on Tuesday, the company is “investing in or collaborating with four startups” to enhance its autonomous vehicle development, doubling its Silicon Valley team and more than doubling its Palo Alto, Calif. campus.

“The next decade will be defined by automation of the automobile, and we see autonomous vehicles as having as significant an impact on society as Ford’s moving assembly line did 100 years ago,” said Mark Fields, Ford president and CEO, in the statement. “We’re dedicated to putting on the road an autonomous vehicle that can improve safety and solve social and environmental challenges for millions of people – not just those who can afford luxury vehicles.”

Building on more than a decade of autonomous vehicle research and development, Ford’s first fully autonomous vehicle will be a Society of Automotive Engineers-rated level 4-capable vehicle without a steering wheel or gas and brake pedals, Ford explained. It is being specifically designed for commercial mobility services, such as ridesharing and ride-hailing, and will be available in high volumes.

To deliver an autonomous vehicle in 2021, Ford has announced four key investments and collaborations that are expanding its strong research in advanced algorithms, 3D mapping, light detection and ranging (LiDAR), and radar and camera sensors:

This year, Ford will triple its autonomous vehicle test fleet, bringing the number to about 30 self-driving Fusion Hybrid sedans on the roads in California, Arizona and Michigan, with plans to triple it again next year, the company reported.

Ford added in the statement that it was the first automaker to begin testing its vehicles at Mcity, the University of Michigan’s simulated urban environment for connected and driverless vehicles. It was also the first automaker to publicly demonstrate autonomous vehicle operation in the snow and tests its driverless research vehicles at night, in complete darkness, as part of LiDAR sensor development.