HALIFAX – The Canadian Hurricane Centre’s top meterologist is suggesting the combination of Hurricane Teddy and a continuing pandemic should prompt Maritimers to plan well ahead for potential power outages.

The storm was churning northward in the Caribbean Friday, with maximum wind speeds over 200 kilometres per hour.

Potential tracks cited by the centre show the storm arriving in the Maritimes as early as Tuesday, with winds at 120 kilometres per hour.

However, the centre’s senior forecaster, Bob Robichaud, notes the potential track is currently 360 kilometres wide, meaning the eye could go into the Gulf of Maine south of Nova Scotia or pass to the province’s east.

He says residents are advised to prepare for hurricane-related power outages this fall, given the need to socially distance when shopping for supplies before storms. 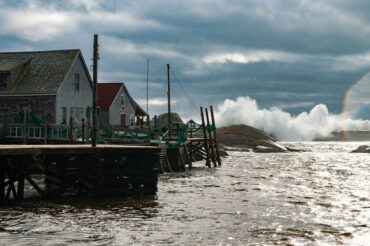 “Even in August we were saying, whatever you need to get through a storm, you should purchase it before the storm is on the map,” he said during an interview on Friday.

“Now, not only is the storm on the map, it’s heading this way.”

In May, the hurricane centre in Halifax warned of another active storm season, with Robichaud noting that the COVID-19 pandemic could make it difficult for people to prepare for rough weather.

The American agency said it was expecting 13 to 19 named storms – six to 10 of which could become hurricanes. Teddy is the 19th named storm of the season.

As the storm moves out of the Caribbean over the North Atlantic, it will be over colder water, causing it to lose some power, said Robichaud.

In addition, there is a high-pressure area moving from the west into the Maritimes, bringing pleasant fall weather.

“That area of high pressure, if it remains very, very strong, it will deflect the storm off one way or another,” he explained.

The meterologist said the potential hazards from Teddy are high winds and coastal storm surges.

“Those are the things people need to begin to think about as we head into the weekend,” he said.

Nova Scotia Power activated its emergency operations centre on Friday and announced it is mobilizing personnel and resources in advance of the storm’s arrival.

The utility is encouraging customers to assemble an emergency kit that includes flashlights, a battery-powered radio and fresh water and to ensure backup generators are installed properly outdoors.

“Nova Scotians should also remember that they need to continue to follow COVID-19 public health direction as they prepare. Stores often have longer lineups in advance of a storm, and physical distancing of two metres and mask wearing are still required,” the agency said in a news release.

Feature image: Waves hit the shore in Cow Bay, N.S. near Halifax on Tuesday, Oct. 30, 2012. The Canadian Hurricane Centre has posted an image of hurricane Teddy, indicating a track of the storm making possible landfall over the Maritimes early next week. The storm was listed by the centre as being in the Caribbean as of 5 a.m. local time today, with maximum wind speeds of over 200 kilometres per hour. THE CANADIAN PRESS/Andrew Vaughan