FORT MCMURRAY, Alta. – The man who led the fight against the wildfire that devastated parts of Fort McMurray in May is urging changes to the way homes are rebuilt to avoid similar destruction in the future. 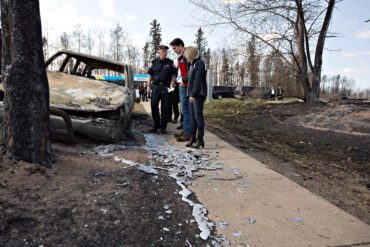 Fort McMurray fire chief Darby Allen says houses in the northern Alberta city should be built much further away from the dense boreal forest that surrounds them and be made out of materials that prevent fire from spreading as easily – from the kind of shingles used to a home’s siding.

“Maybe they’re not allowed to have a wooden fence anymore, maybe it’s a wire fence. Maybe the front row that backs onto that wildland, they must have a stucco interior or a metal exterior – not siding, not cedar shingles.

“The roofing material could be slate, could be tile, could be non-combustible shingles – certainly not cedar shakes,” Allen said in a recent interview at Fire Hall No. 1 in downtown Fort McMurray.

“With council’s backing and approval, we may be able to do something like that.”

Normally, Allen said it can be virtually impossible to change municipal building rules and there would be a lot of resistance to these types of proposals.

The Fort McMurray firefighter have arrived! They will be on cp24 tomorrow morning #backfortmac @backfortmac pic.twitter.com/7gpoZmwYDD

But life has been far from normal in Fort McMurray since a fast-moving and unpredictable wildfire wiped out thousands of homes and forced a month-long, city-wide evacuation.

Pretty much anything that can burn around Fort McMurray already has, but Allen said he wants to make sure the city is resilient decades from now.

“It’s going to cost a lot of money to put in and you’ve got to chop down a lot of trees,” he said. “You’re offending a lot of people. You’re affecting a lot of people and the chances of getting something like that through is pretty well zero.

Wood Buffalo Mayor Melissa Blake said change may come about through residents’ personal choices, rather than through any new city bylaw or building code.

“I’ve got a cedar roof on my house and it’s the first thing I want to change,” she said in an interview.

“If you lived through something like this, you want to make sure you’re more resistant to it in future. If people know there’s a better way of doing it, they may opt just to do it.”

One expert said cities looking to become more resistant to wildfire might want to look at what was done in the past.

“If you look at how we used to do it, we kept the forest away. We kept the wilderness away from where we lived,” he said.

Provincial land use rules will be a big factor in what a post-fire Fort McMurray looks like – as will what the insurance industry is willing to cover, he added.

In #FortMcMurray, Lisa Evanoff speaks at an event welcoming Stanley Barkman to the city after his 2,000 km journey. pic.twitter.com/WB1OyNy3KP

Estimating the future population of the city is another challenge. It was an issue long before the fire, when the low price of crude was causing mass layoffs in the oilsands-centred town.

“There’s a particular challenge in how do you rebuild a town that is shrinking (with) the expectation that it will again expand,” said Hay.

How many people will return to the city after the fire also weighs on Blake’s mind.

“The events were traumatic – there’s no question about that. If you’re one of the people last to leave places like Abasand or Beacon Hill, I can’t imagine what you witnessed, what you experienced and how you feel coming back into that area day after day. If you’re going to relive it repeatedly, that could be a good reason to consider not returning,” she said.

“For others, I think it will take longer to realize whether they’ve got that resilience in themselves or not. I think some of the strongest proponents for rebuilding are the ones who lived through the worst of it. And so you’ve got a real mix and it’s very difficult for me to project how many may or may not come back.”

All the artists rocking out after an amazing fundraiser for Fort Mac @backfortmac pic.twitter.com/DOluvcRnkU

Quite a final number! #BackFortMac "Lean on Me" @AirCanada and #Toronto ready to help. pic.twitter.com/cac0xJN3SS

At #BackFortMac w TO first responders. Thank you for your service and the ppl of TO for your support! #ABleg pic.twitter.com/4RqgKYVW5Y

Talk about talent! All the #backfortmac performers sing along to 'Stand By Me' with #FortMcMurray firefighters. pic.twitter.com/PhZEdr51oE

This may look like our destroyed house from #ymmfire, but it's really the before picture of our future. #ymmstrong pic.twitter.com/aAPx5Ni2Jh