TORONTO – The “beast” of a wildfire that charred Fort McMurray, Alta., was named Canada’s biggest weather story of the year in an annual list compiled by the country’s top meteorologists. 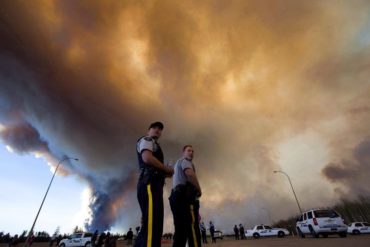 Police officers direct traffic under a cloud of smoke from a wildfire in Fort McMurray, Alta., on Friday, May 6, 2016. The ferocious wildfire that forced nearly 90,000 to flee Canada’s oilsands region and reduced thousands of homes to rubble has been picked as the top news story of 2016 in an annual survey of newsrooms across Canada by The Canadian Press. THE CANADIAN PRESS/Jason Franson

The list, which also includes the melting Arctic Sea ice and one of the warmest Novembers on record, was created by the Canadian Meteorological and Oceanographic Society and Environment Canada’s chief climatologist, David Phillips.

The wildfire forced nearly 90,000 people to desert Canada’s oilsands region and reduced thousands of homes to ash in early May, after unseasonably hot, dry weather.

“It was almost biblical,” Phillips said.

The dry forest floor acted as kindling for the fire, and high winds blew the flames over highways and rivers. Flames shot high into the air.

The heat coming off of the fire – which burned between 800 and 1,000 C – produced twisting winds that turned into small tornadoes, Phillips said.

The fire also caused a dry thunderstorm, he said.

The wildfire, nicknamed “the beast” for its unpredictability, is the costliest insured natural disaster in Canadian history, according to the Insurance Bureau of Canada. There was an estimated $3.77 billion in claims as of mid-November.

Nobody died as a direct result of the fire, though two teenagers were killed in a highway crash south of the city.

Phillips noted that most of the top 10 weather stories had to do with this year’s uncharacteristic warmth.

The heat exacerbated the fire in Fort Mac, and it led to the Arctic Sea ice hitting a new record low.

Phillips said that at the end of May, the Beaufort Sea is normally 92 per cent frozen. But this year, it was just a little over half ice-covered, and melting began a full month ahead of normal.

Last month was the warmest November on record and the 2015-16 winter season was also warmer than usual. In fact, it was the second warmest winter since country-wide records began in 1948.