TORONTO – Four people were killed and several others were injured after flames ripped through an east-end Toronto home early Friday.

Toronto’s fire service said six people were taken from the home and two were in hospital.

Deborah Bies, who lives down the street, said she babysat the six-year-old son of a single mother who lived in the home.

Firefighters were called to the home around 4:30 a.m.

They said the home’s second floor was engulfed in flames when they arrived and one resident was hanging from a window.

Two adjacent homes were evacuated after the fire spread to their roofs. 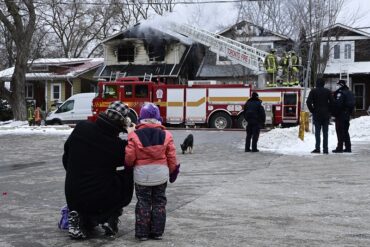 Bystanders look on a firefighters work to put out a house fire in Toronto, Friday, Jan.29, 2021. Fire ripped through an east-end Toronto home early Friday killing four people and injuring several others. THE CANADIAN PRESS/Frank Gunn

Magdalena Dion was one of the people who had to leave a neighbouring home.

She said she and her tenants were woken up by firefighters banging on the door, telling them to get out.

One firefighter fell through a floor and another was hurt by flames while searching the second floor of the home, he said.

Firefighters and evacuees also had to deal with “horrendous weather” as overnight temperatures dropped as low as -20 C, Jessop said.

“It makes an already difficult situation and circumstance even more challenging,” he said.

“We’re always battling slips, trips and falls, and of course for the firefighters in the course of search and rescue and fire suppression … they’re wet to the core and then immediately they’re freezing.”

Jessop said the firefighters who were injured while battling Friday’s blaze had all been treated.

“They’re not significant injuries,” he said. “They’ll be back to work eventually.”

An investigation into the blaze will be carried out by Toronto’s police and fire services as well as Ontario’s fire marshal.

Jason Williams, an investigator with the Ontario fire marshal, said it would take days to figure out how the fatal fire started.

He added that the extreme cold would make it more difficult for him and his team to discern the fire’s origin.

“We’re going to be arranging for some heating and to actually board up the home to keep the temperature elevated to assist with the scene examination over the next several days,” said Williams.

He explained that keeping the site warm is necessary because if the water used to extinguish the fire freezes, it makes it more difficult for investigators to examine the building.

Last year, the province recorded 114 fire deaths, compared to an average of about 84 between 2009 and 2018, according to data from the fire marshal.