Deal volumes for the fourth quarter of 2016 so far have fallen to 201 deals compared to 307 in Q4 2015, according to Willis Towers Watson’s (WTW) latest Quarterly Deal Performance Monitor (QDPM), released on Tuesday. 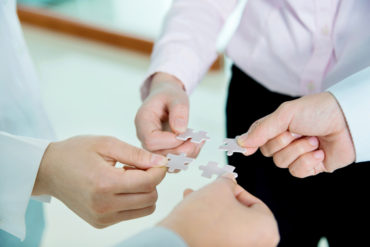 While there is a “significant slowing” of deal volumes in the fourth quarter, those that did close were high-performing, WTW noted in a statement. Despite the reduced number of deals, “Q4 2016 may still show strength in the final two weeks and is predicted to finish the year with an additional 40 deals to complete in the final two weeks of the year,” WTW reported.

“Deal volumes have dropped globally which is driven by the lower levels of transactions in both North America and Europe,” said Jana Mercereau, head of corporate mergers and acquisitions for Great Britain, in the statement. “The results suggest that despite globally low interest rates acting as an incentive for companies to raise capital to undertake M&A activity, the economic uncertainty post Brexit and pre-U.S. election has caused companies to wait and see before they embark on new activity.”

Mercereau added that the drop in performance from previous quarters suggests that markets are being more cautious of M&A activity in the current economic climate. “Alongside this, the complexity of cross-border versus domestic deals and the increasing size of the deals completed, is prolonging integration and causing markets to hold off for a longer period before backing the deal,” she said. “However, it’s worth noting that despite this, acquirers are continuing to track well above market indices, maintaining a strong return on the deals that have closed.” 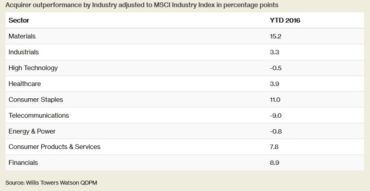 “The fall in both volume and performance of European deals is interesting, as the research looks at completed deals, this drop could be due to the lack of activity immediately after the Brexit vote and to some extent before the U.S. election,” Mercereau added. “The surprise and immediate uncertainty may have caused companies to hold back before they start to commit to deals. However, the number of deals in North America suggest that, as stock markets have performed well, confidence in M&A deals has continued post-election.”

The QDPM found that of those deals that did close in the fourth quarter of the year, showed an outperformance of 0.4pp over the MSCI World Index, a broad global equity benchmark that represents large- and mid-cap equity performance across 23 developed market countries, including Canada and the United States. On a year-to-date basis, acquirers have ooutperformed the index by 5.4pp.

Only completed M&A deals with a value of at least US$100 million were included in the research.

Related: Insurers that carry out a significant acquisition outperform their peers, with the strongest outperformance in North America: study

The industry analysis showed consumer products and services, financial services, healthcare, high technology, materials and telecommunications sectors are all underperforming their respective indices. But in the overall results for the YTD 2016, with the exception of energy and power, high technology and telecommunications, all sectors have outperformed their respective indices.

“Almost all industries are showing a positive trend in performance of M&A deals this year, suggesting the days of pharma dominance in M&A activity may be long gone,” Mercereau said in the statement. “M&A has become a mainstream way to look for growth and one that consistently shows higher return on investment than other growth strategies.”

Mercereau noted that the latest quarter has seen a “natural slowdown. The third quarter saw a greater volume of deals completed, suggesting that companies pushed through deals taking advantage of lower interest rates and before the predicted turbulance of the U.S. election.”

She did say that “we need to be wary of taking one quarter’s results and forming a trend. We have entered a period of great economic uncertainty it is natural that organizations are being more cautious. Fortune favours the brave and with a three-year average of overperformance of markets by 5.8pp, M&A remains a very attractive activity for organizations to look towards.”