PARIS – France is setting up an emergency fund to help those who lost everything after the worst floods in three decades caused the Seine River to burst its banks. 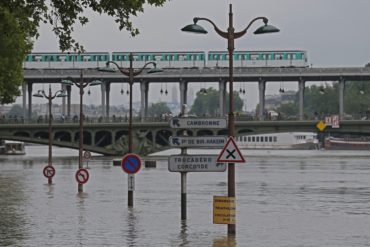 Road signs emerge on the banks of the Seine river next to the Bir Hakeim bridge during floods in Paris, Saturday, June 4, 2016. The level of the Seine started to drop after peaking earlier in the morning. Both the Louvre and Orsay museums were closed as officials said the Seine had been at its highest level in nearly 35 years. (AP Photo/Francois Mori)

Prime Minister Manuel Valls said Monday after a government meeting that the “return to normality will take time” after unusually intense rains that lashed Europe last week. At least 18 people died in parts of Germany, France, Romania and Belgium, and thousands of homes and cars were damaged.

Valls said the emergency fund will be credited with “several tens of thousands euros” (dollars) to provide quick help to people with no resources.

The Seine’s water levels peaked Saturday in the French capital but still remained 3.7 metres (more than 12 feet) above normal Monday. Some areas west and south of Paris were still under flood watch along the Seine and one of its tributaries, the Essonne River.

About 6,000 French homes remained without electricity Monday, and several train stations and roads were still closed in the French capital and surrounding towns.

The renowned Louvre and Orsay museums, both facing the Seine, were among tourist sites closed last week because of the floods, as workers sought to protect thousands of works of art in riverside basements.

The Orsay will remain closed at least through Tuesday, while the Louvre is scheduled to reopen Wednesday morning.

Meanwhile the Louvre had another minor emergency Monday: a small fire broke out at a construction site on a street running alongside the museum.

The Paris fire service said no one was injured and nothing was damaged other than wooden pallets. Images posted on Twitter and Periscope showed a firefighter hosing down the side of the palace housing the museum.

The Venus de Milo gallery has been transformed into a storage room for the artworks @nytimesworld #CrueSeine pic.twitter.com/EtUK3LqbDt

Tonight I went to walk near the Seine to see with my own eyes what means #CrueSeine… Quite impressive… :-O pic.twitter.com/ONmneRStFw