Global market for autonomous, assistive safety and comfort vehicle features up to US$26 billion annually by 2025: Bain & Company

Autonomous vehicles are revving up, with Bain & Company Inc. forecasting annual growth of 12% to 14% for the global market of autonomous and assistive safety and comfort features by 2025. 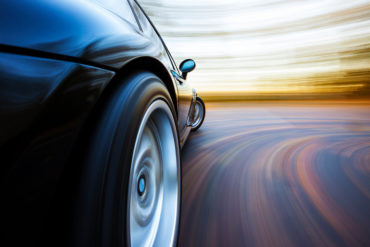 That translates to a global B2B market of US$22 billion to US$26 billion annually by 2025, notes new research released Monday by Bain & Company, which points to increasing interest among buyers in these new technologies.

These technologies include software, hardware and services sold by suppliers to automakers, notes the management consulting firm, which advises clients on strategy, operations, technology, organization, private equity and mergers and acquisitions (M&A).

Bain & Company reports that the market looks attractive, even in pessimistic scenarios. 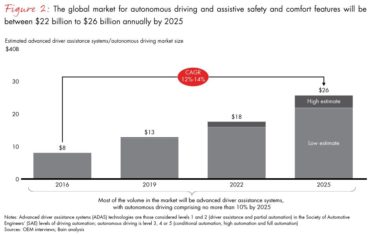 Related: Auto executive warns U.S. Congress it will be ‘pretty hard’ to make autonomous vehicles ‘safe in all conditions’

“In all scenarios, the majority of both the volume and value in the market will remain in driver assistance systems, which require a human driver to continue to monitoring the vehicle,” it adds.

Asked what features they want the most, “drivers named safer driving and lower fuel and insurance costs as the leading benefits from these technologies,” findings show.

“However, their enthusiasm is tempered by concerns about high costs and the reliability of the technology, including its vulnerability to being hacked. Liability issues were also a concern,” the company statement adds. 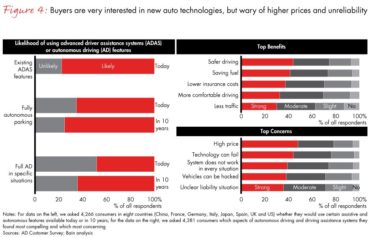 Despite the optimistic forecasts, the number of actual autonomous vehicles is likely to remain small for the next five to 10 years. Even in Bain & Company’s most optimistic scenario, just a tenth of advanced driver assistance systems (ADAS)/autonomous driving (AD) systems will be fully automated by 2025.

Survey findings indicate “customers were not willing to spend much more on advanced ADAS features (including fully autonomous highway driving) than they spend today on basic ADAS features like adaptive cruise control,” the statement reports.

The autonomous driving market will be slow in developing, suggests Dr. Hans Joachim Heider, co-author of the new report and a partner at Bain & Company.

That said, “we anticipate continued strong interest in autonomous driving among consumers around the world, particularly as the cost and complexity of driver assistance technologies decrease,” Heider points out.

Increasing consumer demand means that “suppliers will need to adopt a scenario-based approach to strategy, identifying different possible outcomes and defining the signposts that will help them track developments and make adjustments accordingly.”

To be able to take and hold market share, leading companies will need to take action on four fronts:

“To thrive in this increasingly competitive environment, top-tier suppliers will need to move from the reactive stance of a component maker to a more proactive position that represents a unique perspective on the market and customer preferences,” Bain & Company advises.