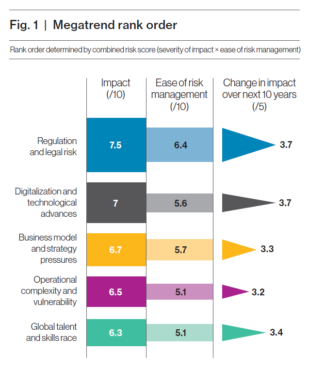 Risk alchemy in the TMT sector also found that technology executives said that cyberattacks/hijacks was the top threat to their industry. The technology, media and telecommunications (TMT) risk index was compiled with responses from 350 C-suite level executives across all three sectors, their respective subsectors, and 11 geographies, WTW noted in a press release.

The executives ranked 50 risks facing their industries, which were divided evenly into five megatrends – global macro-forces that impact business and the marketplace they operate in: regulation and legal risk; operational complexity and vulnerability; global talent and skills race; business model and strategy pressures; and digitalization and technological advances. The research also considered three timeframes: the present, one-year out and 10 years into the future.

The demographic profile of respondents included North America (11%); Central America (11%); South America (11%); Northern, Southern and Eastern Europe (8% each); the Middle East, Southeast Asia, Africa and the Indian Subcontinent (all 8%) and Asia Pacific (9%). All percentages were rounded to the nearest whole number.

In North America (Canada and the United States), consumer/product legislation/lawsuits was the number one risk. The rank order determined by combined risk score (severity of impact x ease of risk management) was digitalization and technological advances (36.6), regulation and legal risk (36.3), operational complexity and vulnerability (36.3), business model and strategy pressures (35) and global talent and skills race (34.9). 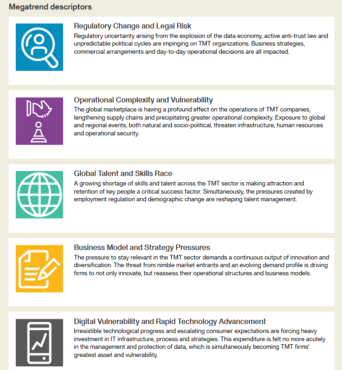 Overall, when accounting for the results of all three industries combined, the regulation and legal risk megatrend topped the list of concerns; in fact, of all risks included in the research, the top three cited by all respondents — data protection (including fines and penalties), intellectual property and patent infringement, and competition and antitrust law — fall under this megatrend, the release said. In addition, external threats such as cyberattacks (ranked fourth) and piracy (10th) stand out as major concerns, while no risk posed by the global talent and skills race megatrend ranked in the top 10.

“While understandable that regulatory change and legal risk are front of mind, none of the identified risks ranking lower down the scale should be ignored, given their potential to either harm or grow a business,” said Sara Benolken, head of the Technology, Media and Telecommunications Global Industry at WTW, in the release. “In fact, certain risks such as cyber-vulnerabilities can exacerbate other risks, including data protection fines and penalties. Looking ahead, according to the research, the digitalization and technological advances megatrend is the most likely to grow its impact over the next 10 years.”

The overall global research found startling differences between how companies in different regions of the world view risk, with the number one perceived risk varying significantly across the globe. North American companies are most preoccupied with consumer product legislation and lawsuits, the report reiterated. In Southern Europe, the threat from new and emerging competitors ranked as the principle concern from respondents. In the Indian subcontinent, outdated legacy IT systems and infrastructure was the top risk. And For Asia Pacific, industry leaders identified the uncompetitive compensation and reward plans as the leading risk to their business.

“Risk is a path to growth,” Benolken said. “Through the proper identification and management of risks, companies across the technology, media and telecom industries can take on more risk and ultimately realize new commercial opportunities. We trust the key findings from our research will enable risk managers in these three notable industries to successfully acknowledge and address current challenges as well as prepare for the future.”