The impact of extreme natural disasters is equivalent to a global US$520 billion loss in annual consumption, forcing some 26 million people into poverty each year, a new report from the World Bank and the Global Facility for Disaster Reduction and Recovery (GFDRR) has found. 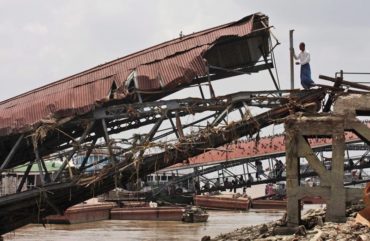 “Severe climate shocks threaten to roll back decades of progress against poverty,” said World Bank Group president Jim Yong Kim in a press release on Monday. “Storms, floods, and droughts have dire human and economic consequences, with poor people often paying the heaviest price. Building resilience to disasters not only makes economic sense, it is a moral imperative.”

The report, Unbreakable: Building the Resilience of the Poor in the Face of Natural Disasters, warned that the combined human and economic impacts of extreme weather on poverty are “far more devastating than previously understood.”

In all of the 117 countries studied, which included Canada and the United States, the effect on well-being, measured in terms of lost consumption, was found to be larger than asset losses. “Because disaster losses disproportionately affect poor people, who have a limited ability to cope with them, the report estimates that impact on well-being in these countries is equivalent to consumption losses of about US$520 billion a year,” said the release. “This outstrips all other estimates by as much as 60%.”

With the United Nations’ climate summit COP22 underway in Marrakech, Morocco, the report’s findings “underscore the urgency for climate-smart policies that better protect the most vulnerable,” the release said. Poor people are typically more exposed to natural hazards, losing more as a share of their wealth and are often unable to draw on support from family, friends, financial systems or governments.

The report uses a new method of measuring disaster damages, factoring in the unequal burden of natural disasters on the poor. Socioeconomic resilience measures an economy’s ability to minimize the impact of asset losses on well-being and is defined as the ratio of asset losses (hazard, exposure and vulnerability) to well-being losses (which includes socioeconomic resilience). Myanmar’s 2008 Cyclone Nargis, for example, forced up to half of the country’s poor farmers to sell off assets including land to relieve the debt burden following the cyclone. Economic and social repercussions of the cyclone will be felt for generations, the release said.

The report assesses, “for the first time,” the benefits of resilience-building interventions in the countries studied, including early warning systems, improved access to personal banking, insurance policies and social protection systems (like cash transfers and public works programs) that could help people better respond to and recover from shocks. It finds that these measures combined would help countries and communities save US$100 billion a year and reduce the overall impact of disasters on well-being by 20%.

“Countries are enduring a growing number of unexpected shocks as a result of climate change,” said Stephane Hallegatte, a GFDRR lead economist, who led preparation of the report. “Poor people need social and financial protection from disasters that cannot be avoided. With risk policies in place that we know to be effective, we have the opportunity to prevent millions of people from falling into poverty.”

Efforts to build poor people’s resilience are already gaining ground, the report found. For example, Kenya’s social protection system provided additional resources to vulnerable farmers well before a drought in 2015, helping them prepare for and mitigate its impacts. And in Pakistan, after record-breaking floods in 2010, the government created a rapid-response cash grant program that supported recovery efforts of an estimated 8 million people.

The report can be read at http://www.worldbank.org/en/news/feature/2016/11/14/breaking-the-link-between-extreme-weather-and-extreme-poverty.