TORONTO – General Motors Co. is bringing its Maven car-sharing business to Canada for the first time as part of the Detroit-based company’s broader strategy for navigating through a rapidly changing automotive world. 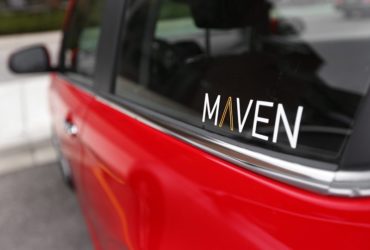 FILE – This April 27, 2016, file photo, shows the Maven logo on a General Motors car-sharing service automobile, in Ann Arbor, Mich. General Motors Co. launched its Maven car-sharing service in New York on Monday, May 15, 2017. The service lets members rent a variety of GM vehicles for whatever they need, from a 30-minute errand to a 28-day road trip. (AP Photo/Paul Sancya, File)

Toronto will be the first city outside of the United States to offer GM’s Maven City app-driven service, which has grown rapidly to 17 American cities since it was launched two years ago in New York City.

The app enables Maven members to reserve cars by the hour, day, week and month.

“The whole premise is to make it a seamless experience, so it becomes habit-forming,” said Julia Steyn, the head of Maven and GM’s urban mobility initiative.

Toronto will be home to a new “mobility campus” this year as part of GM Canada’s automotive innovation agenda.

In the United States, Maven has mostly attracted the millennial generation, with 78 per cent of its customers under the age of 30.

Steyn said the arrival of Maven in Toronto is part of a broader strategy for General Motors, which has been in a race to bring out more electric vehicles, eliminate crashes with automation and address urban traffic congestion.

“Maven’s mission is to be the zero congestion partner,” she said.

Steyn also acknowledged that it’s very difficult to own vehicles in an urban environment.

“It doesn’t make a lot of sense to buy an asset that sits idle for most of its life,” she said.

Maven’s Toronto fleet will initially have about 40 vehicles, including the Chevrolet Cruze, Malibu and Volt, the Cadillac ATS and XT5, and the GMC Acadia and Yukon.

The service will start with about a dozen Toronto locations – mostly in the downtown core and midtown neighbourhoods with a combination of residential, office, entertainment or shopping activities.