The Government of Alberta announced on Wednesday that it is investing about $13.4 million to help the City of Calgary boost its flood readiness. 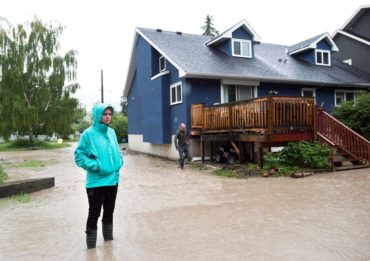 A woman walks stands in the backyard of her home in the flooded community of Bowness as up to 100,000 people have been evacuated from their homes, in Calgary, on June 21, 2013. The federal public safety minister says the government will open its wallet to help Canadians prepare for natural catastrophes spawned by extreme weather linked to climate change. THE CANADIAN PRESS/Nathan Denette

Six provincial grants are part of $63 million earmarked in Budget 2017 to help Alberta communities and organizations adapt to severe weather events and a changing climate, Alberta Environment and Parks said in a press release. The projects will protect downtown Calgary and neighbouring communities during flooding and stormwater events.

Approximately $9.8 million will go to two pump station projects in Calgary’s Sunnyside neighbourhood and to the construction of a new flood-dedicated pump station, the ministry reported.

Another $1.7 million will be directed to flood resilience improvements at a sanitary lift station in the Roxboro neighbourhood, while the West Eau Claire flood barrier will get another $740,000. An additional $567,000 will support improvements to the Harvie Passage site, which will allow open-gate conditions to reduce risks to Inglewood, the Calgary Zoo and the Deerfoot light rail transit line.

The City of Calgary will also receive $522,500 through the Watershed Resiliency and Restoration Program (WRRP), which funds the improvement and creation of wetlands, restoration of riparian areas, as well as education, outreach and the implementation of best management practices.

“This investment will enhance municipal infrastructure and build resilient communities,” Greg Somerville, president and CEO of Aviva Canada said in the release. “It will help protect Calgarians against severe weather events like overland flooding.”

Quentin Sinclair, executive director of the Hillhurst-Sunnyside Community Association, referred to 2013, when the Sunnyside neighbourhood was inundated because existing infrastructure couldn’t handle river and storm water. “These two pump station projects will protect our residents and their properties,” Sinclair said.

The provincial government added in the release that money will also be invested in a soil bio-engineering demonstration site along the Bow River to show how riverbanks can be stabilized using willows and other native plants. Another $3 million will support non-governmental organizations, including $1.25 million for Watershed Planning and Advisory Councils. The Bow River Basin Council will receive a $235,000 grant to design and construct a naturalized stormwater retention facility to promote low impact development practices.

Through four rounds of funding, the WRRP has provided more than $22 million to fund the enhancement and creation of wetlands, restoration of riparian areas, as well as education, outreach and the implementation of best management practices.