Government of Alberta invests in debris dam to protect homes, businesses and infrastructure in Canmore

The Government of Alberta announced on Friday that it is investing an additional $10.3 million to protect homes, businesses and infrastructure in Canmore. 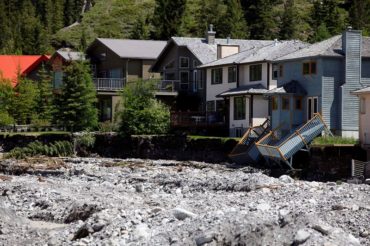 The money represents the final funding towards a $48.6-million debris dam at Cougar Creek and is part of $63 million earmarked in Budget 2017 to help Alberta communities and organizations adapt to severe weather events and a changing climate, Alberta Environment and Parks (AEP) said in a press release.

“The people of Canmore have first-hand experience of how a flood can disrupt lives, businesses and the local economy,” Shannon Phillips, Minister of Environment and Parks and Minister Responsible for the Climate Change Office, said in the release. “This debris dam demonstrates the importance of collaboration in keeping communities like Canmore safe.”

Funding for the debris dam along Cougar Creek builds on $20.4 million in previous provincial funding, along with more than $14 million from the federal government, AEP noted. The Town of Canmore will cover the remaining costs of the project.

When complete, the flood prevention structure will be capable of holding back up to 650,000 cubic metres of water and mountain debris. The grant will also help pay for an access road for structural maintenance and other infrastructure at the site.

“This planned structure will protect thousands of Canmore residents during a flood event, while safeguarding critical infrastructure vital to our community,” said John Borrowman, the Mayor of Canmore, in the release. “This funding will bring us one step closer to making Canmore even more resilient.”

In April, the provincial government said that it was investing about $13.4 million to help the City of Calgary boost its flood readiness. Approximately $9.8 million will go to two pump station projects in Calgary’s Sunnyside neighbourhood and to the construction of a new flood-dedicated pump station, AEP said at the time. Another $1.7 million will be directed to flood resilience improvements at a sanitary lift station in the Roxboro neighbourhood, while the West Eau Claire flood barrier will get another $740,000. An additional $567,000 will support improvements to the Harvie Passage site, which will allow open-gate conditions to reduce risks to Inglewood, the Calgary Zoo and the Deerfoot light rail transit line.

The City of Calgary will also receive $522,500 through the Watershed Resiliency and Restoration Program, which funds the improvement and creation of wetlands, restoration of riparian areas, as well as education, outreach and the implementation of best management practices, AEP said in April.

Since 2015, the province has provided more than $160 million through the Alberta Community Resilience Program. Grants have gone towards flood barriers, erosion control, stormwater management, safeguards for critical municipal water management infrastructure and other high-priority flood mitigation projects in 40 municipalities and two First Nations.