Alberta’s Ministry of Agriculture and Forestry has reported that it is reviewing its response to the Fort McMurray wildfire, which is being held, but estimated to cover nearly 590,000 hectares as of Wednesday afternoon. 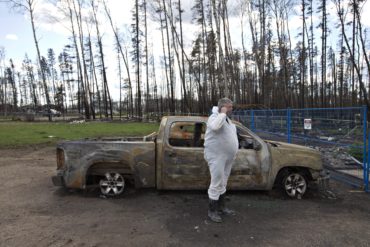 Wade Wilson talks on the phone by his burnt up truck at his home in Saprae Creek near Fort McMurray Alta., on Friday June 3, 2016. Members of the community are now being allowed back into their homes. THE CANADIAN PRESS/Jason Franson

The review will look at the Ministry of Agriculture and Forestry’s wildfire preparation and readiness up to May 31 of this year and the steps taken to respond to fight the Horse River wildfire, the ministry said in a statement. The review will also include an assessment of the weather and fuel conditions that led to the early spring wildfire season.

The wildfire, first spotted on May 1, is considered Canada’s costliest disaster ever. It has destroyed at least 10% of Fort McMurray, including more than 2,400 homes and other structures.

The agriculture and forestry ministry said in the statement that a request for proposals, which closes on Aug. 5, has been issued to select a suitable contractor to conduct the review. A final report is expected to be delivered to government by the end of the year. The cause or origin of the wildfire will not be the subject of this assessment, the release added, as “wildfire investigators are engaged in that effort.”

The wildfire hazard and extreme fire conditions escalated throughout much of the province this spring. The Horse River wildfire started on May 1 southwest of Fort McMurray and has become the most damaging wildfire in Alberta’s history, surpassing the impacts of the 2011 Slave Lake and 1919 Lac La Biche wildland, urban-interface wildfires.

In 2011, a review was initiated after wildfires burned into communities in the Slave Lake area. Twenty-one recommendations were produced from that review and all have been implemented or are continuing to be implemented, the ministry reported.

Oneil Carlier, Alberta’s Minister of Agriculture and Forestry, said in the statement that the Fort McMurray wildfire has altered the lives of thousands of people “who are now faced with the difficult task of rebuilding their lives. Reviews like this are a normal part of our business when faced with extreme wildfire conditions or an extreme wildfire event. We are constantly reviewing how we fight wildfire in an effort to become safer and more efficient.”