Gross written premiums up 9.7% for Northbridge

Toronto-based Northbridge Insurance had an underwriting profit of $1.1 million in the three months ending June 30, compared to essentially no underwriting profit during the same period in 2016, when the Alberta wildfires cost the company $21 million in current period catastrophe losses, Fairfax Financial said in its management discussion and analysis of its financial results for second quarter of the year. 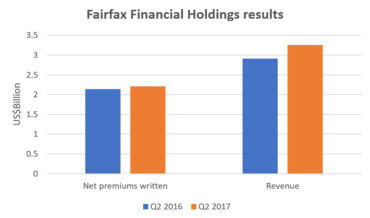 After the end of the second quarter, Fairfax also closed its acquisition of the majority of Zug, Switzerland-based Allied World Assurance Company Holdings AG. That deal – which includes US$1.9 billion in cash and US$2.1 billion worth of shares – closed July 6. Other investors – including Ontario Municipal Employees Retirement System and Alberta Investment Management Corporation (AIMCo) – invested US$1.58 billion to acquire an indirect equity interest in Allied World, Fairfax noted Aug. 3 in its MD&A. 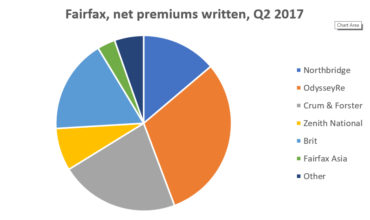 Company-wide, Fairfax reported a combined ratio in insurance and reinsurance operations of 94.9% in the latest quarter, a 0.8-point improvement from 95.7% in Q2 2016.

Net earnings attributable to Fairfax increased from US$238.7 million in Q2 2016 to US$311.6 million in the latest quarter.

Fairfax reported that Brit had net favourable prior year reserve development of 2 combined ratio points in Q2, which “primarily reflected better than expected emergence on casualty and property reinsurance and energy lines of business, partially offset by net reserve strengthening of $13.1 resulting from a change in the Ogden discount rate that was effective from March 2017.”

Fairfax’s total revenue – including non-insurance operations – was US$3.26 billion in Q2 2017, up from US$2.91 billion in Q2 2016. Outside of insurance, Fairfax has holdings in retailing (including William Ashley, Sporting Life and Golf Town), The Keg chain of steak restaurants and a majority interest in Cara Operations Ltd., whose restaurant chains include Swiss Chalet, Harvey’s,  Milestones, Montana’s, Kelsey’s, East Side Mario’s, New York Fries and Bier Markt, among others.