HALIFAX – Preliminary results of an imaging survey near a Nova Scotia town where a sinkhole swallowed part of a park last summer show an extensive belt of hundreds of additional sinkholes stretching for kilometres.

Amy Tizzard, a geologist with the provincial Department of Energy and Mines, said the new imaging around Oxford, N.S., clearly shows a well-defined line of sinkholes that extends for about five kilometres and is about 500 metres wide in some areas, in and around the town.

“The number of sinkholes within that (belt) are numerous – hundreds if not a thousand,” said Tizzard, adding that it will take time to summarize all of the data. 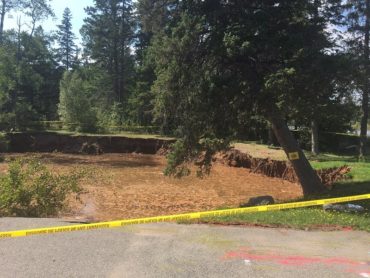 A sinkhole is seen in Oxford, N.S. on Monday, September 3, 2018. A large sinkhole in a sleepy Nova Scotia town appears to have stopped growing, at least for now, as officials continue to monitor the situation. THE CANADIAN PRESS/Rob Roberts

The area includes parkland near the Oxford Lions Club that has been declared permanently off limits after a large sinkhole suddenly developed last August. A recent geological study by engineering consulting firm GHD showed the extent of the problem is much greater than first thought.

Tizzard said the province’s data comes from an aerial survey technique called lidar, which bounces lasers off the ground and strips away surrounding buildings and vegetation.

“We are looking at a bare earth model. It shows the number of sinkholes that aren’t readily apparent from maybe a satellite image, because its taken all the trees away.”

Tizzard said the area’s topography is fairly well-known because of previous geological mapping surveys, but the lidar images provide another tool to help scientists understand how often sinkholes form, how big they are, and how deep.

She cautions that not all ground depressions are the same, and the images captured in the lidar survey range from smaller depressions in the forest to bigger ones that have linked up to create significant holes in the underlying sediment.

In some larger depressions known as cover-collapse sinkholes, groundwater can dissolve underlying materials such as salt or gypsum creating a void, which eventually leads to a collapse of the ground above.

Tizzard said indications are that’s what happened in the Oxford Lion’s Club parkland, where it was found that some locations nearby also present a high risk for further ground movement.

“Cover-collapse sinkholes are really unpredictable, and there won’t be much sign ahead of time that a collapse is about to occur, so that’s why that entire parkland is of high risk,” she said.

The GHD survey made public this week included seismic and electrical conductivity tests to determine the topography around Oxford’s sinkhole, which swallowed trees and picnic tables in the area.

It is now filled with water and measures approximately 30 metres wide by 40 metres long, with a depth of 15 metres. The engineering survey estimates it would take 14,000 to 19,000 cubic metres of material to fill it.

The survey also found that the conditions that created the sinkhole exist throughout the site and the potential for further sinkhole development there is “relatively high.” Over time, it said, the Lion’s Club building may become unstable. There is a high risk of future sinkholes developing nearby with a potential to affect a main route through the town, Highway 321.

“It’s kind of like waiting for an earthquake,” Jones said of the potential for more sinkholes. “You never quite know if it’s going to happen, or when it might happen, or to what level.”

Jones said the GHD report gave a sense of areas to watch, which will help town officials move forward with planning.

“There’s certainly instability in portions of that (park) property, and they do move a little closer to the main street, which is an area of concern,” she said. “It would be a matter of just establishing a monitoring program at this point.”

Meanwhile, Tizzard said the Oxford parkland findings don’t necessarily mean that other areas around the town or in other regions of Nova Scotia are suddenly going to see the ground open up.

“There are many types of sinkholes, some are more slowly subsiding and some are more rapid like the one in this park,” she said. “That’s why we need to continue to study these things so we can understand the risk.”

The results of the province’s lidar survey are expected to be posted online within the next month.

– With files from Holly McKenzie-Sutter