LIVERPOOL, N.S. – Another weekend of storm surges in Nova Scotia has a south shore mayor calling for provincial help to cope with the rising impact of climate change on waterfronts.

The mayor of the Region of Queens Municipality said Liverpool’s waterfront parking lot and a nearby street are being flooded more often, and intensifying surges of sea water are creeping into local businesses. 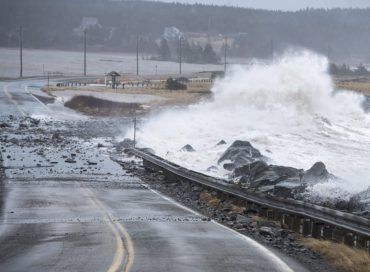 Waves pound the shore on a closed section of Highway 207 in Lawrencetown, N.S. on Friday, Jan. 5, 2018. A winter storm hit Nova Scotia, New Brunswick, P.E.I. and parts of Newfoundland and Labrador, with wind, rain and heavy snow in places. THE CANADIAN PRESS/Andrew Vaughan

David Dagley, 66, says water has been about a third of a metre above normal levels in recent flooding, causing temporary closures and repeated cleanups of businesses and shops along Water Street in Liverpool.

He said in the 1970s the routine was one storm surge a year, but there have been three events just since Christmas.

“As far as the flooding in the downtown of Liverpool, it’s an issue we’ve had some internal conversations on, and it’s a work in progress … funding is a primary concern at this point,” he said in an interview.

The mayor said with the small municipality operating on a $19-million budget and possible costs to keep the waters back exceeding $1 million, his community needs help from other levels of government.

“We have some research to do, and we need to secure some funding,” he said.

Linda Smith, the 45-year-old owner of Memories Cafe on the Liverpool waterfront, said the cleanups have become an exhausting routine for her restaurant since she bought it six years ago.

“Over time we’re going to suffer irreparable damage. The salt water comes right into our restaurant and travels through my entire dining room,” she said.

“Depending on how quickly I can get in after the flooding starts, my table, my shelving, my counter where I serve customers all get soaked in salt water … We rush in, clean up and get back to business, but over time it will become something devastating to my small business.”

Kenny Veinot, an amateur photographer, took photos of cement blocks being blown down as the waves break crash through a barrier.

“The issue was the Transport Department didn’t put a foundation under it (the breakwater). It’s on the existing beach rocks … About two years ago the blocks started to fall,” he said.

Jason Hollett, the executive director of the climate change division of the Environment Department, said in an interview that most research indicates increasing frequency and intensity of storm surges.

The storm surges are being accompanied with sea-level rise, with the International Panel of Climate Change now expecting an average rise of one metre over the next 80 to 100 years off Canada’s East Coast, said Hollett.

Dagley said his community has made it known to the province’s Department of Transportation and Infrastructure Renewal that the protective barrier along the Western Head causeway needs stabilizing.

“I would anticipate if measures are not taken by the department of transport, the sea will eventually breach the road, as it has several years ago,” he said.

The storm surge was also causing closures of the coastal Highway 207 just east of Halifax near Lawrencetown beach over the weekend and on Monday.

– Story by Michael Tutton in Halifax.