TABER, Alta. – Taber corn, that tasty sweet treat on the cob that Albertans look forward to in late summer, will be much harder to find this year after a major storm ripped through the province’s southern corn belt this week.

Loonie and golf ball-size hailstones driven by a wind that reached more than 140 km/h tore into an area Tuesday evening that included the communities of Taber and Barnwell. 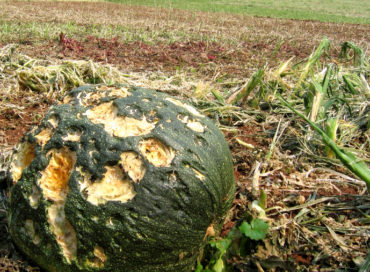 The fast-moving system wiped out several fields of corn, which some producers say had stood about two metres tall before the disaster struck.

Numerous buildings and trees were also damaged and in one instance nearly all the vinyl siding on a wall of a Mennonite church in Barnwell was stripped off.

Grower James Molnar says Taber corn is typically available for about 50 days, but the storm has prematurely ended the season.

He says what had already been harvested will likely be quickly snapped up.

“It’s done. There won’t be another dozen picked,” said Molnar. “One side is OK on the cob, the other side is just like you put it on a cement floor and rolled it and it turned into cream corn.”

Molnar said when he checked his property, he found stalks slashed and beaten to no more than 10 to 60 cm in height – a complete loss.

He said down the road at Johnson Fresh Farms, considered the biggest corn grower in the area, the loss is estimated at 90 to 95 per cent.

Molnar Taber Corn and Pumpkins supplies both vegetables to Safeway and Sobeys stores in Lethbridge, as well as 20 grocery stores in Calgary.

The family also grows squash, cabbages, peppers, tomatoes and onions, but nearly all of those crops have been lost as well.

“We have insurance, but it basically comes up probably 15 to 20 per cent short of our costs,” said Molnar, who asks that people pray for the farmers in the area. (LethbridgeNewsNOW, CFFR)