Hannover Re announced Wednesday it has completed three insurance-linked securities transactions, through Marsh and McLennan Companies Inc.’s GC Securities unit, with a total value of $960 million. 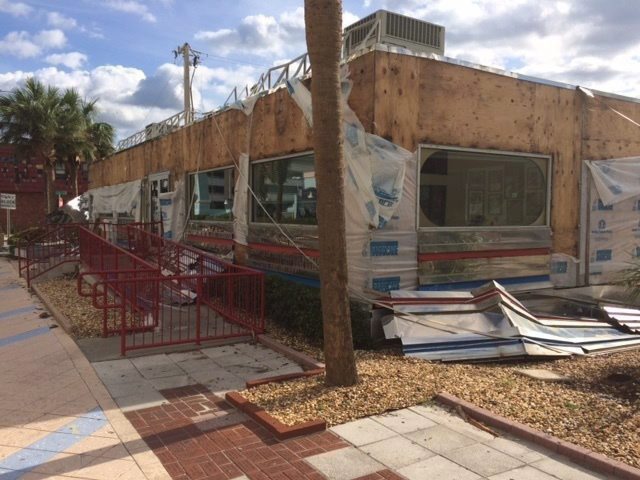 The metal siding was ripped off The Silver Diner that sits on the corner of Atlantic Ave and Butler Blvd on barrier island in Daytona Beach, Fla. (AP Photo/Terrance Harris)

Hannover Re said it transferred $750 million in risks to the capital market for Texas Windstorm Insurance Association and Massachusetts Property Insurance Underwriting Association.

“The catastrophe bond volumes for TWIA and MPIUA” amount to $400 million and $350 million respectively.

“These transactions also have a maturity of approximately three years,” Hannover Re said.

In its global recap report for June, Aon plc’s Impact Forecasting Unit noted that there was an estimated economic loss of US$175 million, from thunderstorms, June 2-4 in Texas. Those storms produced winds gusting to 100 kilometres per hour.

Hannover Re announced July 12 it transferred named storm and severe thunderstorm risks for the American Integrity Insurance Company of Florida. It raised $210 million from investors and the transaction matures in three years.

In Florida the “damage along the coastline was extensive from areas around Melbourne towards Jacksonville,” Impact Forecasting said of Matthew. A wind gust of 219 kph was registered at a 500-foot tower at the Kennedy Space Centre, Impact Forecasting added.

“In March, 2017, the Florida Office of Insurance Regulation reported that nearly 119,350 residential and commercial claims alone had been filed with payouts totaling an estimated US$1.2 billion.”

Five hurricanes affecting Florida made a Swiss Re list of the 40 costliest insurance losses between 1970 and 2015. The fourth most costly insurance loss in that 45-year period was Hurricane Andrew in 1992, Swiss Re reported, with $127 billion in losses adjusted for inflation to 2015. Swiss Re included that list in a sigma report, released in 2016, on natural disasters and man-made catastrophes in 2015.

Wilma and Rita occurred in 2005 while Charley and Frances occurred the year before.

More News
Related
Insured residential, commercial property losses from Hurricane Matthew estimated to be US$4 billion to US$6 billion: CoreLogic
Total economic losses from nat, man-made disasters in 2016 at least US$158 billion: Swiss Re sigma estimate
Hurricane Harvey likely to be one of the costliest natural disasters on record for U.S. economy: Aon Benfield
Aon unit pegs economic loss from Matthew at US$15 billion