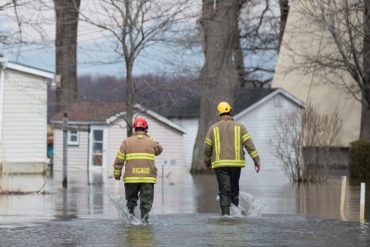 Members of the Rigaud’s emergency services wade through water on a street in the town of Rigaud, Que., west of Montreal, Thursday, April 20, 2017, following flooding in the area. A state of emergency has been issued for the town. THE CANADIAN PRESS/Graham Hughes

Environment Canada said a massive system is slowly drenching much of Ontario, Quebec and the Maritimes, triggering everything from contingency plans and flood warnings to states of emergency in dozens of municipalities.

Senior Climatologist David Phillips said the weather system, which stretches down as far as the southern United States, is stalled over the vast region due to high pressure systems elsewhere in the country.

The result, he said, is relentless rain falling on regions that have already endured double to triple the seasonal norms for rainfall over the past five weeks.

“The amount of moisture is significant,” he said of the situation. “And of course when that falls on what you’ve already had, it makes it more of an impactful storm than it would be.”

The problem is particularly acute in Quebec, where 132 communities had been affected by the floods as of noon Friday and some 700 people have been forced to abandon their homes.

Environment Canada is calling for an additional 30 millimetres of rain north of the St. Lawrence River, adding Montreal may experience a slightly lesser amount. Eastern Quebec is also beginning to experience flooding due to the rain and melting snow.

For the residents of Ile Mercier, a small island in the middle of the Riviere des Prairies off the northern end of Montreal, rising water levels meant they could no longer cross their only bridge by car.

“The water is up to your knees on the bridge,” said Nello Dicaprio, who has lived on the island for 11 years and decided to remain in the chalet he rents. “I’ve spoken to people who have crossed. They say the water is very cold and there is a current.”

Dicaprio said he would wait out the situation and hoped the water levels recede – but he only had enough food for a few more days and there are no stores on the tiny island.

Chad Bouchard, who is taking care of his grandmother’s house on the island, was less optimistic, with the water less than two metres away from the home as of Friday afternoon.

He said since authorities were no longer allowing cars on the bridge, he couldn’t bring over any more sand bags to protect the house.

“We’ve been abandoned,” he said. “But we still have control of the house. My uncle and our neighbour want to stay. It’s our homes.”

Jean-Francois Blais, who lives in central Quebec and had also been affected by the floods, called for more government help.

“We need help now and we will need help when these waters have left. There will be an enormous cleanup and we need help. That’s obvious.”

Assurances of assistance came quickly from Prime Minister Justin Trudeau during a scheduled stop in Montreal.

“Our thoughts are with the families and communities affected by the severe flooding that’s going on throughout Quebec and indeed across the country,” he said. “We stand ready and willing to give whatever help the federal government can to help people through this situation. And we will of course be there as the cleanup continues after the waters recede.”

Spots along Edgemere Dr in Greece are starting to flood over with water from Lake Ontario. pic.twitter.com/b9V3vfH0Oj

In Atlantic Canada, the wet weather is expected to continue through the weekend, Phillips said.

The agency said the additional rain will exacerbate current flooding and advised residents near the Saint John River and its tributaries to remain on alert.

In Ontario, the eastern community of Clarence-Rockland had already declared a state of emergency in anticipation of heavy rainfalls expected to last through the weekend.

Warnings from Environment Canada forecast between 50 and 90 millimetres of rain for some communities across the southern and eastern part of the province.

In places like Ottawa, which Phillips said has received nearly 300 millimetres of rain since Jan. 1, the rain is expected to lead to flooding in the coming days.

The same holds true for Toronto, which announced a contingency plan to close the heavily travelled Don Valley Parkway expressway if water levels in the adjacent Don River rise too high.

Ontario Premier Kathleen Wynne said emergency teams are on alert, and the ministries of Municipal Affairs and Community Safety are both keeping a close eye on the situation province-wide.

“We are very aware of the situation around the province and monitoring it very, very closely,” she said. “So just hope everyone stays safe.”

Environment Canada has also issued a special weather statement for a large area of southern B.C. due to the potential for severe thunderstorms, saying conditions are favourable for the development of strong wind gusts, large hail and heavy rain.

It said heavy rain associated with the storms, combined with snow melt, may lead to rising river levels and could increase the risk of flooding.

Such conditions are most unusual for this part of the country, Phillips said, adding the warnings are at this stage were more of a precaution than a guarantee of inclement weather.

– with files from Giuseppe Valiante in Montreal.

SPECIAL WEATHER STATEMENT for all of southern Ontario. Heavy rain Thursday thru Friday. Up to 50 mm possible (flooding the big concern). pic.twitter.com/uc3Lw1gUYq

Lib mp Steve McKinnon says has hundreds of constituents under water – if Quebec asks for help with flood Ottawa will be ready #cdnpoli#hw pic.twitter.com/AQod6eE0F7

More News
Related
Too early to confirm costs from flooding in B.C., Ontario, Quebec and Maritimes: Aon
Quebec says high water levels across province to peak by Wednesday
Rebuilding after disasters should stress safer, better, Goodale says
May storms in Ontario, Quebec and the Maritimes caused hundreds of millions in damage and damaged more than 5,200 homes: Aon Benfield