Heavy rains and strong winds wreaking havoc in the Maritimes

HALIFAX – Thousands of homes and businesses across Atlantic Canada were without electricity early Tuesday due to heavy rain and strong winds that lashed the region on Thanksgiving Monday. 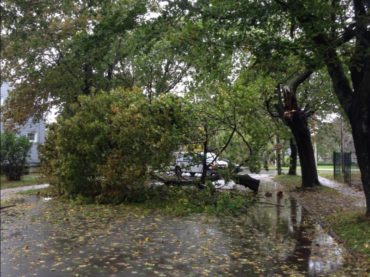 Much of mainland Nova Scotia received more than 100 millimetres of rain as of Monday evening. Photo: @haligonia.

Environment Canada said another 25 millimetres of rain was expected Monday night before tapering to scattered showers. But very strong and gusty northerly winds were expected to continue through early Tuesday.

The rain caused some flooding and some road washouts in affected areas, particularly on highways near Truro and near Kemptown.

Well over 61,000 customers across Nova Scotia were without power early Tuesday, with about a third of them in the Sydney area.

RT @DTruckair: This is the flooding in Glace Bay, Nova Scotia. #nsstorm pic.twitter.com/CSa4EIg093

In Newfoundland, a heavy downpour forced the community of St. Alban’s to declare a state of emergency with 1,200 residents unable to leave the town due to damage to some roads and the Swanger Cove Bridge.

A rainfall warning remained in effect early Tuesday for several areas, including Gander, with Environment Canada predicting another 10 to 15 millimetres of rain overnight and into the morning.

St. Alban’s Mayor Jamie LeRoux told radio station VOCM that he and other community leaders were spending the night at the town hall helping people affected by the weather.

Prince Edward Island was also soaked by heavy rain and was under a wind warning. Maritime Electric was reporting power outages in numerous communities throughout the province.

Wind gusts of up to 90 kilometres an hour were expected in central and eastern areas of P.E.I. before easing off overnight.

Environment Canada said the Charlottetown Airport had received 73 millimetres of rain and the community of St. Peters northeast of Charlottetown had been pelted by more than 81 millimetres.

Agency meteorologist Jason Sheppard said the rain have been so intense in Nova Scotia, the dry ground wasn’t able to absorb the rain at the rate it came down, leading to flood conditions.

“It’s not always a good thing,” Sheppard says. “If you get too much in too short of a time, it just runs off.”

Halifax RCMP asked drivers are asked to use caution because of water on the roads coupled downed trees and power lines. (News95.7, VOCM)

Small crick flowing over the road earlier due to #nsstorm. pic.twitter.com/rjfTyN1PVP

This is what's going on in my home town. My dad's basement is flooded, he's been bailing buckets all day#nsstorm #Sydney #NovaScotia pic.twitter.com/UjRM2UewLz

A before and after shot of a property in Grand River Falls, Cape Breton that has been flooded pic.twitter.com/ycEhmvFcH6

NSP outage map, lots of us in the dark. #matthew pic.twitter.com/ikly05WNXp

MacKeigan Rd in Marion Bridge. Road blocks being set up. Pls use caution in the area. pic.twitter.com/8mJfH315IT

Via Krista Baker Thompson on Facebook, Route 352 near Phillips Head in NFLD has seen extensive flooding. The Rock has seen well over 100mm: pic.twitter.com/NyPDSJmJi6

This is how bad it is in Cape Breton right now! Corner of Whitney Ave and Hospital St. in Sydney (photo credit: Lachlan MacKinnon) pic.twitter.com/1tBLiCJrr2