Canadians and insurers agree on one thing: Distracted driving is the biggest threat to safe roads.

A recent survey by Rates.ca shows that 40% of Canadians think distracted driving is the top cause of car-related deaths, surpassing impaired driving at 33%.

When asked to rank the top distractions while behind the wheel, texting (58%) was by far at the top of the list. Other distractions include placing a hand-free call (19%), eating while driving (14%), drinking coffee or water (8%) and using a GPS mapping program (8%).

The survey also found that more 58% of passengers have told a driver to stop texting to making phone calls while behind the wheel.

“The fact that Canadians are now acknowledging distracted driving as the Number 1 threat to fatalities on the road is significant,” said Paul Kovacs, road safety ambassador at Rates.ca. “Learning that passengers are now speaking out and taking action when observing distracted driving behaviour is an important new finding.”

Distracted driving has long been a topic of concern for insurance companies. Intact, for example, published a blog highlighting the dangers of increased mobile phone usage. “Our beloved smartphones, which have become just as indispensable to us as our keys and wallets, have dramatically worsened our driving habits and safety on the road,” the post says. 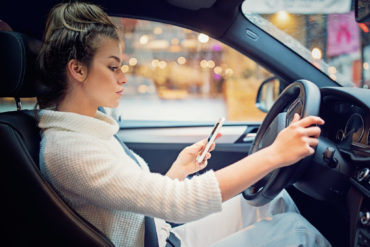 In an interview with Canadian Underwriter, Phil Gibson, Aviva’s managing director of personal insurance, also placed blame on the entertainment options in vehicles. “In my mind, between [cellphones] and all the doodads on the screen, that is what’s distracting people and that’s what’s causing so many of these collisions,” he said.

A 2017 American Automobile Association study complained that automakers were overloading dashboards with infotainment technology. “It’s adding more and more layers of complexity and information at drivers’ fingertips without often considering whether it’s a good idea to put it at their fingertips,” said University of Utah professor David Strayer, who led the study.

Distracted driving contributed to 21% of all fatal collisions and 27% of serious injury collisions in 2016, according to Rates.ca, citing Transport Canada’s National Collision Database. Gibson told Canadian Underwriter that he wouldn’t be surprised if the numbers were actually higher: It’s hard to prove a distracted driving collision, he notes, since few would admit to being distracted. He pointed to the increase in single-vehicle and front-end crashes.

“Things that we could just attribute with common sense and go, ‘That sounds like you weren’t really fully paying attention to what was going on.’ Those, we saw double-digit increases,” he said. “So I do attribute those to distracted driving.”

Kovacs, who is also the Institute for Catastrophic Loss Reduction’s executive director, stressed that anything that takes a driver’s attention away from driving their vehicle creates unsafe driving conditions. “Engaging in activities like texting, answering a phone call, or drinking a coffee should only take place when the car is parked.”