After hiking twice, there’s ‘no predetermined path’ for rates from here: Bank of Canada’s Poloz

OTTAWA – The head of the Bank of Canada says that after two interest-rate hikes this summer there is “no predetermined path” for the benchmark going forward. 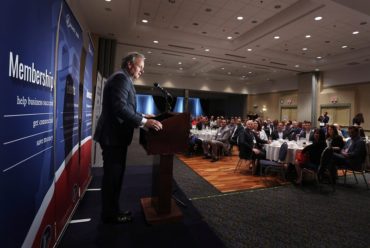 Bank of Canada Governor Stephen Poloz speaks to the St. John’s Board of Trade on Wednesday, September 27, 2017 in St. John’s. THE CANADIAN PRESS/Paul Daly

In a speech Wednesday, governor Stephen Poloz said many unknowns and external risks remain, even though the economy had a surprisingly powerful start to the year.

Due to these uncertainties, Poloz warned there could be more surprises ahead – in “either direction.”

“There is no predetermined path for interest rates from here,” Poloz said in prepared remarks of the speech he was to deliver in St. John’s.

“Although we are confident that the economy has made significant progress, we cannot be certain of exactly how far there is left to go.”

His speech comes after the sizzling national economy motivated the bank to raise the rate once in July and again earlier this month.

Poloz pointed out that the bank’s decisions have become “particularly” data-dependent due to uncertainties such as protectionist sentiments in some parts of the world and geopolitical developments.

He also said there are “unusual” unknowns following a protracted period of slow economic growth and extremely low interest rates.

The speech’s focus on the importance of data could be seen as a way to respond to some criticism the bank attracted around its communications approach ahead of the September hike, which caught many forecasters off guard.

Some analysts took issue with the fact the bank did not provide any public remarks for them to scrutinize for hints during the eight-week period between the July and September rate decisions.

On Wednesday, as he made his first public comments since July, Poloz said the bank’s decision to raise the rate a second time followed a string of unexpectedly strong economic numbers.

He noted, however, that the bank doesn’t expect the economy to maintain the torrid pace in the second half of the year.

The bank’s next scheduled rate announcement is scheduled for Oct. 25.

Before the speech, most analysts had been expecting the central bank to raise the benchmark rate a few more times over the coming year.