Louisiana, Mississippi flooding could exceed US$1.5 billion in economic damage, insured portion will be much less: Impact Forecasting

Recent flooding across parts of Louisiana and southern Mississippi could approach or possibly exceed US$1.5 billion in economic damage, Impact Forecasting suggested in a cat alert issued on Sunday. 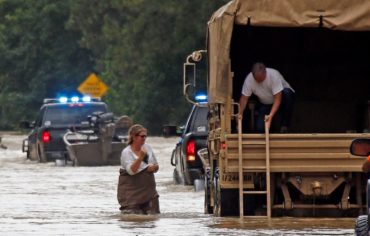 Jeff Robinson lowers a ladder from a Louisiana National Guard truck as his wife wades through flood waters from the Natalbany River near their home in Baptist, La., Saturday, Aug. 13, 2016. Robinson was seeking a boat ride from state wildlife agents to pick up his wife and children when the National Guard truck arrived. A slow-moving storm that has dumped almost a foot of rain in Louisiana parishes south and west and Mississippi counties north of the Mississippi-Louisiana state line, are in for more rain. National Guard soldiers and other officials in boats and helicopters plucked more than 1,000 people from their homes and cars as “unprecedented, historic” flooding swamped Louisiana, the governor said Saturday. (AP Photo/Rogelio V. Solis)

“Based on the volume of river crest records that have been set during this event, this is one of the most catastrophic non-tropical cyclone triggered flood events in the state of Louisiana since 1983,” the alert said.

Impacting Forecasting, Aon Benfield’s catastrophe model development team, noted in the alert that “given the ongoing nature and the large magnitude of the event, it is going to take several weeks for full damage assessments to be completed.” However, Impact Forecasting also referenced another major flood and thunderstorm event that impacted parts of Louisiana, Texas and Arkansas in March, causing roughly US$1.5 billion in economic damage.

“It is currently anticipated that the August 2016 event will approach and possibly exceed this cost once all damage incurred to homes, businesses, public facilities, vehicles, infrastructure, and agriculture is taken into account,” the company said. The March even left more than 5,000 homes damaged or destroyed. “It is expected that the August 2016 flood event will have impacted minimally as many homes and other structures.”

From an insurance perspective, it is anticipated that the insured portion of the economic loss will be substantially less. While Louisiana has the third-highest number of active National Flood Insurance Program (NFIP) policies in place in the United States – trailing Florida and Texas – there remains a large percentage of homeowners and business owners who are either uninsured or underinsured for flood damage, Impact Forecasting reported. Latest housing count statistics from the U.S. Census in 2015 indicated that there were 2.02 million housing units in Louisiana. But as of June 2016, there were only 452,208 NFIP policies actively in place.

The weather event involved a slow-moving area of low pressure that brought multiple days of extreme rainfall across parts of Louisiana and southern Mississippi from Aug. 9 to 14, causing catastrophic flood damage in several communities. At least four people were left dead or missing. States of emergency were declared in both Louisiana and Mississippi as several feet of floodwaters left homes, businesses, vehicles and agricultural land almost entirely submerged after several rivers and tributaries burst their banks, the alert said.

The governor of Louisiana called the floods “unprecedented” and “historic.” Among the hardest-hit areas included the greater Baton Rouge metro region, “as record crests along the Comite and Amite rivers triggered extensive flooding and substantial damage to local infrastructure. This made rescue efforts challenging for local officials and the 2,500 deployed members of the National Guard.” Some parts of Louisiana officially recorded more than 30 inches (762 millimetres) of rain in 48 hours. “This qualifies as a 1-in-1,000 year rainfall event; or can also be described as having a 0.1% chance of occurring at a particular location in any given year,” the alert said.

Graves floating and bursting open from the flood! Pray for my hood? #337 #Louisiana pic.twitter.com/X5rnXFahg0

The scope of damage throughout Louisiana was widespread, with vast swaths of the state impacted by flood inundation. Emergency services undertook at least 7,000 water rescues of residents from their homes or vehicles as the rapid rise of water caught many people by surprise. “At the time of this writing, three people were confirmed to have been killed and one other person was listed as missing. One fatality occurred due to slipping into a flooded ditch; while the other two were the result of vehicles being swept away or overcome by floodwaters.” The missing person was reported in St. Helena Parish.

More than 200 roads were closed throughout Louisiana due to sections being inundated or eroded by floodwaters. One particular 62-mile (100-kilomete) stretch of Interstate 12, between Baton Rouge and Covington, was among the flooded roads, the alert said, adding that at least 1,200 vehicles were stranded. State officials reported that at least 1,400 bridges would need to be inspected prior to being reopened to traffic as there were concerns that the overflowing rivers may have compromised the structural integrity of some bridges. Additionally, Amtrak was forced to temporarily suspend its route between Chicago and New Orleans.

Even the Louisiana governor’s mansion in Baton Rouge was forced to evacuate after floodwaters inundated the basement to chest-height and shut off electrical supplies. The Louisiana State University campus also severely flooded, prompting the cancellation of several events that were due to take place at the campus on Saturday and Sunday.

Among the hardest-hit areas in Louisiana was Tangipahoa Parish. Denham Springs, in Livingston Parish, was also badly hit as entire shopping malls were inundated and, in some areas, only the roofs of cars showed above the floodwaters, the alert said. In the nearby town of Walker, the flooding was so intense that caskets were unearthed from one cemetery. Officials in Vermillion Parish estimated that at least 1,500 homes there had sustained some degree of damage after the Vermillion River overflowed and reached a height of 18.4 feet (5.6 metres), consistent with a 100-year flood return period. Other preliminary home damage counts included 1,000+ in East Baton Rouge Parish, 1,000+ in Livingston Parish, and hundreds individually in St. Helena and Tangipahoa parishes, among others.

A total of 21 parishes in Louisiana individually declared states of emergency, and the statewide emergency was to remain in effect until Sept. 10. At least 27 parish government offices were scheduled to be closed on Aug. 15.

Prayers for Louisiana and Mississippi during this flooding, so many homes and businesses ruined. pic.twitter.com/ahqikWBVMw

The severity of the floods also hampered the ability for communication, Impact Forecasting said. Extensive power outages and limited cellphone service made rescue operations difficult as residents were unable to notify personnel. Near Baton Rouge, an AT&T switching facility was damaged by floodwaters, sending most cell service offline.

Elsewhere, extensive damage was also noted in Mississippi as four counties declared a state of emergency: Adams, Amite, Pike, and Wilkinson. The town of Crosby, in Wilkinson County, was among the worst affected areas, as the entire population of 342 had to be evacuated. One local official reported that most of the buildings in the town had sustained some degree of water damage. A number of water rescues were also carried out in Centreville, Wilkinson County, near the border with Amite County.

At the time the alert was issued, there were concerns of additional flash floods through the Mississippi and Ohio Valleys by Aug. 15-16. Despite rains coming to an end in Louisiana and Mississippi, it will be several days until some rivers fully crest and begin to subside. It is expected that a few areas will endure multiple days with river heights above flood stage.

Viewer Brad gives us a look at the #louisianaflood damage inside his Ponchatoula home. My live report @WGNOtv 11AM pic.twitter.com/byQ7PioaGJ

Magnitude of Louisiana / Mississippi flooding hard to envision because the 3-day rainfall is so far off the charts. pic.twitter.com/DnbYRqMbGv

This is I55 South at the Mississippi/Louisiana line due to all of the flooding. Wow! Prayers for all impacted! pic.twitter.com/dk3EzDg3t8