ROCKVILLE, Md. – A house in a Maryland suburb of the nation’s capital was levelled early Friday by a thunderous explosion heard for miles around, a blast so powerful it shattered windows and caused other damage to several neighbouring homes, authorities said. 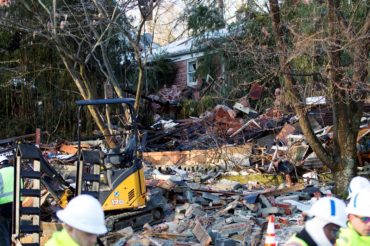 A leveled house is seen after an explosion in Rockville, Md., Friday, March 17, 2017. A house in a Maryland suburb of the nation’s capital was leveled early Friday by a thunderous explosion heard for miles around, the blast shattering windows and causing other damage to several neighboring homes, authorities said. (AP Photo/Jose Luis Magana)

The explosion shook the city of Rockville about 1 a.m. and scattered debris widely, a fire official said, adding that while the cause wasn’t immediately known.

As a precaution, utility workers turned off gas and power at the home and others nearby. Fire and utility officials also went door to door asking neighbours to leave for their safety. Yellow police tape cordoned off the site.

“It’s just a pile of bricks. There’s not anything left of the house,” said Pete Piringer, chief spokesman for Montgomery County Fire & Rescue Service. “I’ve heard there were calls from miles away.”

A legal notice appearing in The Washington Post on Wednesday stated the home would be sold at auction on Friday afternoon, but the auction firm’s website no longer listed it Friday morning. The auction firm referred questions to Brock & Scott, the firm advertising the sale, but they did not return calls seeking comment.

Neighbours said a man lived in the home. Investigators didn’t know if he or anyone else was inside at the time, but searchers were planning to exhaustively check the rubble during the day, Piringer said. They were on the site with search-and-rescue dogs as early as daybreak.

The powerful jolt shook residents from their sleep in the neighbourhood of modest, mostly one-story single-family homes, including Luzia Ricci.

“I could feel it underground,” she said. “I was wondering, ‘Are we having an earthquake?’ But it was so short.”

Ricci said she went outside to see what was going on and could see the flames from her backyard. She started to go closer with her daughter, but then she heard another pop and backed away. She said her husband went ahead and captured video of the fire.

From the scene, Piringer described the home damage as “catastrophic,” and said about a dozen other houses, mostly built of brick, were damaged by debris kicked up by the blast. He said debris could be seen hanging 100 feet up in trees in the neighbourhood, and that the explosion even moved some cars parked along the street.

Summoned by several frantic 911 calls, about 75 firefighters needed only about 20 minutes to put out a fire in the rubble, Piringer said.

In May 2011, an explosion destroyed a home on the same street, killing two people, after a resident disconnected a clothes drier’s gas service without capping the line, Piringer said.