How AI can help shape a more effective disaster response

Artificial intelligence (AI) should be used not only to predict what will happen, but to shape and influence that outcome, the president of IBM Canada said Wednesday.

“Predicting it is good, but the value that you get as an enterprise is when you take that prediction and alter the outcome to something that you like versus [something] that you let happen to you,” said Ayman Antoun, speaking at the Gartner IT Symposium/Xpo in Toronto. 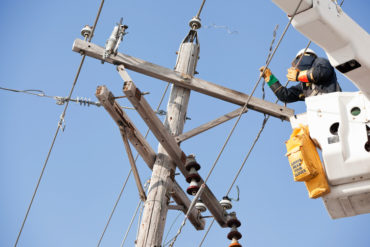 Antoun was discussing “Chapter 2” of an organization’s digital journey – moving from AI experimentation to transformation at scale with AI and hybrid cloud. While he was not discussing the insurance industry in particular, transforming at scale has definite implications for the industry.

Antoun used the example of Hydro One. “For the longest time, a storm would hit, damage would take place, then they will send the crew,” he said. However, sometimes there could be temperature or wind changes that will shift where the storm will hit and where the damage will be and “the crew is in the wrong spot.”

So, Hydro One took IBM’s artificial engine, Watson, and trained it with insight from five years of combined power outage and weather data. “What they do today with the insight they get from that massive amount of data [1,000 incidents] is that they are able predict when a storm is coming 24 or 48 hours in advance, and alter the outcome,” Antoun said. “And now we have the crew in the right spot, the right crew re-prioritizing which [call] you are going to handle. That’s an example of scaling.” 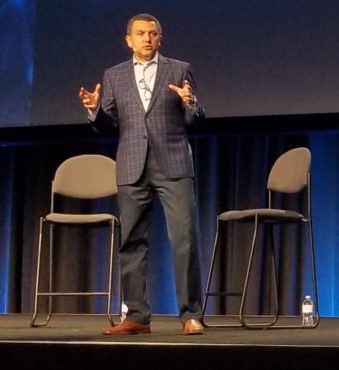 IBM Canada president Ayman Antoun speaking at the Gartner IT Symposium/Xpo on June 5.

Antoun describes Chapter 2 of a company’s digital journey as no longer embedding automation to a task. “Automation is being embedded in an end-to-end process,” he said. “You’re automating your supply chain, not a specific task in the supply chain.”

The data infrastructure – what Antoun calls the information architecture (IA) – is also important to allow companies to have an end-to-end view of the different types and sources of data. “There is no successful AI without a thoughtful IA.”

The second component revolves around hybrid cloud. “This is where lines of businesses are now expecting to get the value from data and the insight from the data to satisfy the unique client experience for their clients,” Antoun said. “They need to have the ability to move that data around and manipulate that data.”

While sometimes it is adequate to be on a public cloud, sometimes data needs to sit on a private cloud. There could even be a hybrid multi-cloud: multiple public clouds inside an organization combined with private and on-premises software.

The Gartner IT Symposium/Xpo was held at the Beanfield Centre in Toronto from June 3-6.