How an award-winning risk manager helped absorb a rate spike

One example of why she is deserving of such recognition lies in how she helped her employer prepare to absorb a drastic insurance rate increase.

Clarke is the manager of corporate risk and recovery for the City of St. John’s. She prides herself on doing her research and finding ways to keep the municipality’s costs in check, while also preparing for unexpected hiccups by building those potential costs into the budgeting process. That process helped the city when it came time to renew its insurance.

“This time, our premium went up probably about 43%,” Clarke told Canadian Underwriter. “Our council was in shock because they’re just so used to us getting a better deal.”

While an increase of that size may be anticipated under certain circumstances, this was clearly above and beyond anything they’d come to expect. So Clarke had to explain that this is why she built those buffers into the budget — to take on such unexpected events.

No, she hadn’t planned on a global pandemic. Instead, she was thinking about the higher number of natural disasters that have taken place around the world, and how her coastal community was not immune. 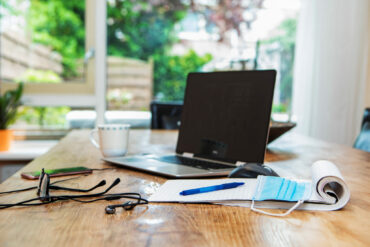 “The thing is, we were in a soft market for so long that people got used to getting the best deals possible and best coverage possible,” she said in an interview with Canadian Underwriter recently. “It’s hard to get people to realize that things do change. It’s been looking to be a hard market for a long time, and COVID just took the wires right out from under everybody.”

Clarke recently won the Donald M. Stuart Award, the highest honour within the risk management field in Canada, and presented by the Ontario chapter of the Risk and Insurance Management Society (RIMS).

“I’m very honoured to be [recognized], honestly,” she said. “There’s a lot of people in the risk society and in the different chapters who do a lot of work. It just shows how great the team is; that they do recognize people for what they do for them.”

Clarke remembered how she felt when she had to start working from home, calling it a “crazy” time. “It just didn’t seem right to me,” she admitted. “I didn’t feel at ease. [But] after a month or so, you do get used to it and you learn how to get your stuff done. I realized I was probably more technically savvy than I thought I was. Really, when I had to do stuff electronically, I didn’t really need paper anymore. So just positives to everything.”

Of course, being at home required some adjustment, such as missing out on those personal contact points. She’s been back in the office since the start of December, though it’s quieter than normal, since not everyone has returned. “[Of the] ones who are here, we obey the rules and do the best we can,” she said.

Newfoundland and Labrador has reported either one or no new cases of COVID-19 each day since the start of 2021. The last time multiple cases were found in the province was back on Dec. 27 and 28, when five cases were announced over the two days.

Despite risk management training and planning for a crisis, an event of this magnitude caught everyone off guard, Clarke said.

“It makes you realize that crappy things can really happen,” she said in an interview. “I mean, this was something you always planned for — luckily we did have a plan in place — but we were very surprised when we all had to work from home. We got [our plan] into play so fast. I’m really glad that we did have a plan there for a pandemic as part of our business continuity. But we still didn’t think it would ever be like this. Never ever.”