How are your employees feeling? No, really.

Brokers are naturally social people. So how do they respond when they’re cut off from their typical social gatherings and unable to interact with people the way they’re used to?

If they’re like people in other professions, it’s a heavy mental toll that has a heavy financial cost for employers, brokerage experts suggested during a recent web conference.

Philip Swayze, Hub International’s east region practice leader of health and performance in the U.S., noted that employee mental health had been on employers’ radar even before COVID-19. But after the global pandemic was declared in March 2020, things have become worse.

“Mental health and well-being in the workplace have been a huge concern,” Swayze said during Hub’s recent Resilient virtual summit. “Loneliness and social isolation have been exacerbated by the COVID restrictions. Those are serious risk factors that came to light a few years back.”

He cited a Harvard study that showed social connections and relationships have a powerful influence on people’s health. “Now the data also tell us that depression is a comorbidity for most chronic illnesses, increasing the average cost [for employers] by more than 250% compared to someone without depression.” 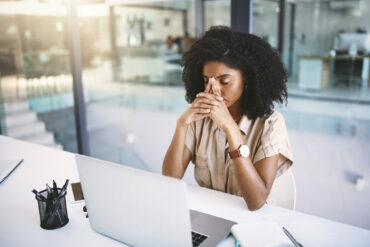 Mary-Lou MacDonald, Ottawa-based national practice lead, health and performance at Hub, said the root causes of mental health issues have long existed in the workplace, only to be exacerbated in recent times.

“It has been well-demonstrated that it’s important to provide a psychologically safe work environment before any health promotion endeavours can succeed,” she said during the session, Beyond Burnout: Responding to Employee Mental Health Needs.

Talking about mental health can make people uncomfortable, Swayze noted. That may be because people don’t understand it, it hits too close to home for them, or both.

“Either way, I think it’s important that we re-shape the conversation and think about mental health challenges as existing on a continuum,” Swayze observed.

Oftentimes, mental health is thought of in a binary way, said Swayze — either you have a mental illness or you don’t. And since there’s still a strong stigma attached to mental health, some like to believe that shouldering the load belongs to other people; that one person can’t influence another’s mental well-being.

“The truth is that about 69% of all people are in this stressed or moderate risk zone of a big bell curve,” Swayze said.

At one end of this bell curve, about 17% of people are feeling great and are flourishing, Swayze observed. At the far end of the spectrum, however, 14% are struggling and in the need of advanced intervention. That leaves many in the middle at varying degrees between the two.

“The first critical step is to address the stigma and normalize issues like depression and burnout and anxiety, and really acknowledge that at some point in time, really all of us are struggling to feel our best self,” Swayze said.

Managers and supervisors are included in this as well, he pointed out.

Companies that already had a strong wellness program in place pre-COVID will be ahead of the curve.

“As lockdowns ease, and as we all start coming back to work and returning to the office, productivity will thrive in companies where employee well-being is a daily consideration,” MacDonald said. “I know that for sure.”