A carbon monoxide accident at a hotel could easily lead to a liability claim in the millions, an insurance lawyer says.

On Tuesday, 46 people were taken to several Winnipeg hospitals after a carbon monoxide leak affecting a three-story Super 8 motel, The Canadian Press reported. Initially, CP quoted a local firefighter as saying 15 patients were listed as critical because of high carbon monoxide readings in their blood. Quoting Winnipeg Regional Health Authority, CP said Wednesday that none of the people taken to four hospitals required admission. 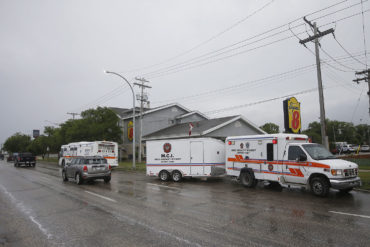 Forty six people were taken to hospitals from a Super 8 hotel in Winnipeg, on July 9, 2019. THE CANADIAN PRESS/John Woods

“When you are housing that many people and they are exposed to carbon monoxide, you could have a lot of claims arising out of that kind of incident,” Scott Brearley, Vancouver-based co-chair of the insurance practice at law firm Singleton Reynolds Vogel LLP, said in an interview.

Brearley was commenting in general on the liability risk a hotel faces if there is a safety problem with mechanical or electrical equipment.

“Insurers who are taking on a [hotel] risk might be interested in what kind of maintenance schedule they have and what kind of equipment is in the hotel,” said Brearley, whose areas of practice include commercial general liability, errors and omissions and directors and officers liability. “Owners and occupiers of those establishments have obligations to maintain that equipment, to perform reasonable inspections of that equipment to make sure it’s functioning properly.”

A total of 52 people, including two children and hotel staff, and a dog, were evacuated from the Super 8 in Winnipeg on Tuesday morning, CP reported.

The hotel’s owner, Justin Schinkel, told CP the hotel recently passed a fire inspection and has never had a carbon monoxide leak before.

So, a young affluent hotel guest who is travelling for work might make a very large claim for future income loss. “If you’ve got a brain injury, the future care costs alone could put you in seven figures,” said Brearley.