Is the industry taking a consistent approach to overland flood coverage?

Are carriers taking a consistent approach to covering overland flood?

The flood waters sweeping across New Brunswick and Quebec have brought the issue to the forefront.

In general, overland flood was not covered in Canada until 2015; only sewer backup was typically available. But since that time, insurers have introduced insurance coverage for property losses related to overland flood. Recently, brokers have reported an inconsistent approach among carriers to overland flood coverage. 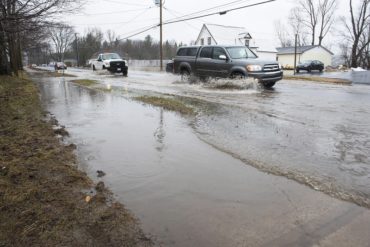 Streets and sidewalks are flooded from heavy rain and flood water from the St. John River on Riverside Drive in Fredericton, N.B. on Saturday, April 20, 2019. THE CANADIAN PRESS/Stephen MacGillivray

One broker made such an observation in B.C. Broker magazine, when commenting on the looming one-year anniversary of major flooding in Grand Forks, B.C. in May 2018.

“Nobody has the same coverage, some have limitations, and one company denied everything because there is a new sewer backup clause – half the problem was flood and half of the problem was sewer backup,” the magazine quotes Sam Cowan, vice president of sales and marketing and a partner with RHC Insurance Brokers in Grand Forks, as saying.

In the Grand Forks example, Cowan said most of the damage in the downtown area was sewer backup, as everything was inundated with flood water. He reported that one of his customer’s buildings was insured for sewer backup, but not overland flood. “He was denied for a sewer backup claim because he was told that the water is coming from an overland flood,” Cowan is quoted as saying. “But he had two tenants in the same building who had sewer backup coverage afforded by two different insurance companies.”

The issue is coming up in New Brunswick, where the province’s Emergency Measures Organization said Tuesday that due to “severe flooding” in Fredericton, all courthouse operations would be relocated. New Brunswick’s Department of Transportation and Infrastructure reported 35 road closures as of Monday, and water levels in the St. John River Basin were beyond flood stage in several areas. The Canadian Press said there were some flooded basements in Fredericton, where up to 200 homes had been affected by the rising river.

“In most instances, we are now seeing a denial of coverage under sewer backup when the source was determined to be overland flood and cover was not purchased,” said Andrew Campbell, office manager at Hall & Fairweather Insurance in Saint John (which was recently acquired Archway Insurance).

Historically, companies were more flexible in this regard, but now that overland water products are available, they are denying these claims, he said. “This is confusing for clients, especially if they had a previous claim paid under [sewer backup] and are now denied coverage for the same loss because they do not have overland water coverage.”

Most coverage issues occur when clients have not purchased overland flood coverage or the company does not offer coverage to meet the client’s particular circumstances, Campbell said Monday. For example, not all companies will cover water loss relating to rising rivers.

Campbell notes that water continues to rise, “and we do expect to have claims coming in. The forecast for this week poses a significant risk for more flood-related water losses. Current water levels are a huge concern for homeowners located in flood plain areas.”

Brokers in the province are working with clients to educate them and help them reduce the risk of loss due to flooding by, for example, providing risk management advice on ways to reduce risk by not storing valuables in basements and checking sump pumps. “The lines of communication are open and many clients are taking pre-emptive measures such as placing sandbags at the base of their homes.”